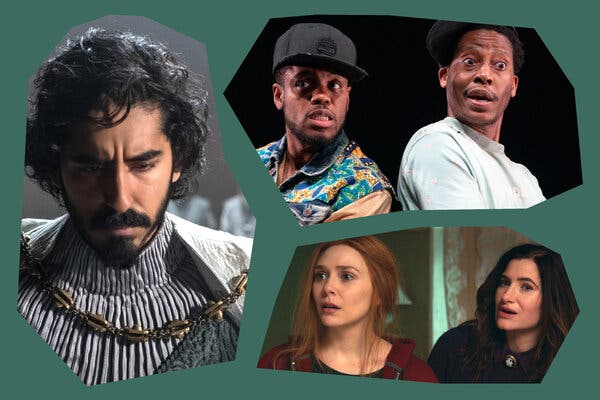 It’s a great time to be a nerd — take it from me, a lifelong fangirl. Fandoms are one of the ways I mark a year across the spectrum of entertainment genres that I consume every day. Here’s my list of 10 favorite TV series, movies and plays that thrilled me as a comics nerd, pop culture nerd, literary nerd and drama nerd.

As a longtime fan of “Cowboy Bebop,” I’d been waiting for Netflix’s live-action adaptation of the anime with cautious anticipation. Though the series, a sci-fi Western noir about a ragtag crew of bounty hunters in space, is fantastic when it’s good and pretty damn terrible when it’s bad, the music, the style and the performances of the perfectly cast main stars pull the show through and make it essential for “Bebop” fans. But more important, the show drew me back to the original, helping me appreciate anew what makes “Cowboy Bebop” a timeless classic. (Streaming on Netflix.)

I’m far from a history buff, but will happily nerd out about Tudor England, especially when it resembles a high school drama. So “Six,” a glamorous Broadway musical about the wives of King Henry VIII, is up my alley. “Six” was on my docket in March 2020, and missing it when the pandemic shut down Broadway was one of my sorest disappointments in those first few weeks of lockdown. But now that it’s back it feels like the perfect Broadway return show, with its flamboyant costumes, big lights and even bigger musical numbers. (Read our review.)

‘The Mitchells vs. the Machines’

Fun, lovable and playful, this animated film is also culturally relevant, as it follows a kooky family that is humanity’s last hope after robots take over the world. The movie is admirably multilayered, mixing standard dialogue with voice-overs and internal monologues and combining 3-D animation with hand-drawn illustrations. And the references — to Apple products, YouTube and Furbys, among many other things — are enough to please both millennials and Gen Z-ers. (Streaming on Netflix.)

The first time I saw “In the Heights” was over a decade ago, on Broadway; it was my introduction to the wonder that is Lin-Manuel Miranda. Jon M. Chu’s vibrant film adaptation was also my path back to that precious realm of overpriced candy and artificially buttered popcorn — the movie theater. In Chu’s hands, the story of a bodega owner named Usnavi, who aims to leave his beloved New York for his dream life in the Caribbean, teems with color and movement. And the cast — including Anthony Ramos, Daphne Rubin-Vega, Christopher Jackson and Miranda himself — is full of delights for theater nerds. (Read our review.)

Anthony Ramos as Usnavi and Melissa Barrera as Vanessa in “In the Heights.”Credit…Macall Polay/Warner Bros.

As a poet with two literature degrees, I can’t resist a weird archaic poem about Celtic mythology — or a film adaptation of that poem, “Sir Gawain and the Green Knight.” “The Green Knight,” eloquently directed by David Lowery, manages to pull off the dazzling feat of translating the tone, style and even rhythm of a written text to a visual medium. The actor Dev Patel gives a striking performance as Sir Gawain, a young knight who, in a bid for greatness, becomes a player in a deadly game against the mysterious Green Knight. With eloquent cinematography, a ruminative score, and a plot that takes flights into the surreal, “The Green Knight” resists conventional storytelling to train its viewers to receive the work like a poem: slowly, with plenty of room for symbolism, atmospheric shifts and silences. (Read our review.)

Who you gonna call to revive a pop culture classic? The original director’s son, apparently. After the franchise’s vapid 2016 reboot, “Ghostbusters: Afterlife” shows the difference it makes when a project is a family affair. The director Jason Reitman picks up where his father, Ivan Reitman, left off in the 1980s, and even got the old cast together for this sequel, in which the family of the late Egon Spengler move to Oklahoma to inherit his farm. His grandchildren stumble onto his legacy and bust some ghosts to prevent an apocalypse. I watched this film in a room of eager nerds at New York Comic Con in October. Though “Afterlife” does do a lot of fan-pandering and nostalgia-baiting, I still found it absolutely endearing. There were tears. (Read our review.)

The Marvel Cinematic Universe has been expanding so much that clever storytelling and character development often take a back seat to big battles and team-ups. That’s what made this Disney+ series, about Wanda and Vision living a domestic life that’s actually an illusion, so fascinating. The nods to different sitcom eras and the examination of Wanda’s grief after “Avengers: Endgame” make this show one of the most fruitful dives into the M.C.U. Oh, and Kathryn Hahn as the winking Agatha Harkness is absolute perfection. (Streaming on Disney+.)

Two Black men waiting on a street corner, hoping to leave but inexplicably trapped. When my friend and I walked out of Antoinette Chinonye Nwandu’s stunning play — my first Broadway show since the reopening — she said, “I won’t ever forget that.” I felt the same. There were problems (I found fault with the ending), but not enough to undercut the wonder of the performances, the staging and Nwandu’s clever nods to Samuel Beckett’s “Waiting for Godot.” (Read our review.)

The cancellation of this animated show was one of the great TV travesties of the year. The final season premiered this spring; I jumped aboard late, but happily binged all 40 episodes of the surreal anthology series, about characters who are summoned onto a fantastical train and must journey from car to car, tackling their trauma and pain through strange challenges, in order to return home. A corgi car, a chrome car, a map car, a cross-eyed duck car — the show’s imaginative turns were always surprising. But it’s the depth of the story, which explored existential and moral questions and wasn’t afraid to go into dark territory, that made the show unforgettable. (Streaming on HBO Max.)

The magic of this movie is so inviting that while watching it I kept thinking how bad I wanted to step into that world. A Colombian family with special abilities live in a house that has come under a mysterious threat. The animation is breathtaking and the music, by Lin-Manuel Miranda, is catchy. The heart of the film, however, is a message about the importance of family. Like the prophetic uncle of the film, I have my own vision of the future: There shall be many rewatchings. (Read our review.)

Mirabel, at center and voiced by Stephanie Beatriz, is the Colombian teenager at the heart of “Encanto.”Credit…Disney
Tags
Fan Fi̇lm Green Show This

‘The Snowy Day,’ a Children’s Classic, Becomes an Opera

10 Works of Art That Evaded the Algorithm This Year

The Much-Vaunted American Melting Pot, Cracks and All