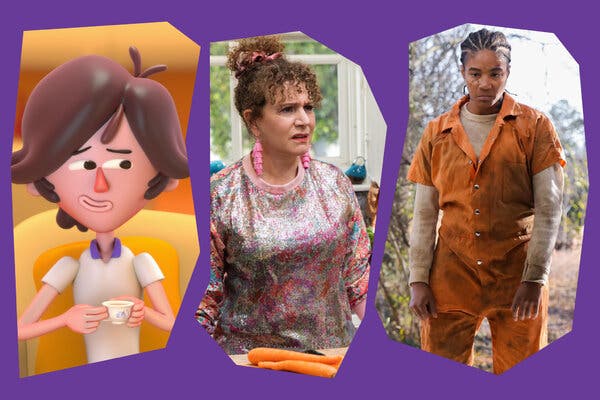 Comedy got dangerous in 2021. Not cancel-culture dangerous (though after creating one of the loudest controversies of the year with his Netflix special “The Closer,” Dave Chappelle might disagree). More like “I might contract Covid at this show” dangerous. After a (hopefully) once-in-a-lifetime shutdown of live performances, audiences returned to indoor shows, and comics picked up where they left off. These are some of the highlights.

Best Punch Line Inside a Club to Defuse Covid Anxiety

One night at the Comedy Cellar, Dave Attell told a guy in the crowd: “I’m glad you’re wearing a mask because we need a survivor to tell the story.” But in the basement of the West Side Comedy Club, Bill Burr took down the elephant in the room even quicker: “I’m happy to be down here working on a new variant.”

Tig Notaro is not the first stand-up to turn herself into a cartoon, but her “Drawn” HBO special was the most ambitious attempt, using a different animated style for each bit — realistic one moment, whimsically fantastical the next, veering from the perspective of the audience to a cockroach. Imagine if Pixar did stand-up.

A scene from “Drawn,” an animated HBO special from Tig Notaro, which uses a different animated style for each bit.Credit…HBO

This was the year that visual humor caught up to the verbal kind in comedy specials. Bo Burnham invented a new comic vocabulary with his Netflix hit “Inside,” a filmic meditation on isolation, the internet and ironic distance itself. It was so tuneful and thematically well made that a blockbuster musical is surely in his future.

In “Imperfect Messenger,” a Comedy Central special packed with refined comic gems, Roy Wood Jr. begins by discussing things that are not racist but feel racist. Things that have, as he puts it while rubbing his thumb and his fingers together as if he’s grasping at something, “the residue of racism” — like when white people use the word “forefathers,” or when you go somewhere and there’s “too many American flags,” which he calls “too much freedom.” He rubs his fingers and thumb again and asks: “How many American flags equal one Confederate flag?”

With a jangling horror soundtrack, claustrophobic close-ups and the menacing humor of a Pinter play, the movie “Shiva Baby” offers a modern spin on the postgraduate angst of “The Graduate.” Its director, Emma Seligman, is the most promising cringe-comedy auteur to come along in years.

In the Audible original “May You Live in Interesting Times,” Laraine Newman describes studying with Marcel Marceau, dating Warren Zevon and farting in front of Prince. She gives you what you want in a “Saturday Night Live” memoir, but what makes her audiobook excel is her nimble voice, impersonating a collection of characters, none more charismatic than her own.

“Mentally Al” catches up with the unsung comic Al Lubel when he’s near broke, disheveled and struggling with an impossibly dysfunctional relationship with his mother. Onstage, however, he’s consistently hilarious, even when the audience doesn’t think so. After countless documentaries about how a really funny person became a star, there’s finally a revelatory one exploring why one didn’t.

Sometimes the most powerful punch is a jab. In “Oh God, an Hour About Abortion” — an understated, humane and deeply funny examination of the experience of having an unwanted pregnancy and an abortion — Alison Leiby uses observational comedy to reframe a political question at a critical moment for reproductive rights.

The comedian Alison Leiby performing at Union Hall in Brooklyn in September.Credit…Krista Schlueter for The New York Times

Not since Chaplin has running from the police been as funny as Tiffany Haddish in “Bad Trip,” a scripted movie on Netflix that includes unscripted scenes, such as Haddish emerging from under a prison bus dressed in an orange jumpsuit, forcing a male bystander into an uncomfortable decision.

There’s never been a better year for handsome comics making jokes about their fraying mental health. Along with Bo Burnham unraveling onscreen and John Mulaney describing the depths of his addiction in live shows, the British comic James Acaster delivered his masterwork, “Cold Lasagne Hate Myself 1999,” on Vimeo. It’s a nearly three-hour show, wildly funny and deeply felt, that mocks how easily mental struggles can be turned into entertainment before doing just that.

There were prop missiles, shining diamonds and a massive sign that announced “World War III” in lights. I’m still not sure what the battle was about, but as soon as the born entertainer Katt Williams charged into the Barclays Center, yellow sneakers a blur, it was clear he had won.

Naomi Ekperigin is a natural — a comic that can make you laugh at just about anything: summing up Nancy Meyers movies, vaccines, clichés (why L.A. sucks), the way she says “OK.” In a half-hour set, as part of the collection “The Standups” that will be released on Netflix on Dec. 29, she even has two different jokes about the color beige that earn laughs. It’s a delight.

Naomi Ekperigin performs in Season 3 of “The Standups,” coming to Netflix on Dec. 29.Credit…Clifton Prescod/Netflix

Last year ended with the release of “An Evening With Tim Heidecker,” a parody of edgy stand-up comedy that was a bit too vague to really resonate. Now, Heidecker hit the bull’s-eye with his recent YouTube spoof of The Joe Rogan Experience; its 12-hour running time (really one hour on a loop) is its first joke. So precise, so meticulously sensitive to the details, to the cadence and lingo of that podcast, his conversation with two sycophantic guests (played with pitch-perfect smarm by Jeremy Levick and Rajat Suresh) is a master class in sounding absolutely earth-shattering while saying precisely nothing.

Best Argument for the Staying Power of ‘Curb Your Enthusiasm’

No comedy that started in 2000 should still be this funny. Part of the reason for this feat is the consistently elite supporting performances, none more important than Susie Essman, who shined this year. Famous for her volcanic fury, she can do dry and understated just as well. I have not laughed louder at a television show this year than after hearing her say the word “caftan.”

Jim Gaffigan has put out so much material for so long that he’s easy to take for granted. The fact that he’s family friendly probably doesn’t help his press either. His dynamite new special, “Comedy Monster” (premiering Tuesday on Netflix), may be his best, showing Gaffigan at his most dyspeptic. It suits him. Who would have thought that he would so satisfyingly eviscerate marching bands and parades? Or have the most unexpected prop joke of the year (keep an eye out for a grand piano).

The Much-Vaunted American Melting Pot, Cracks and All