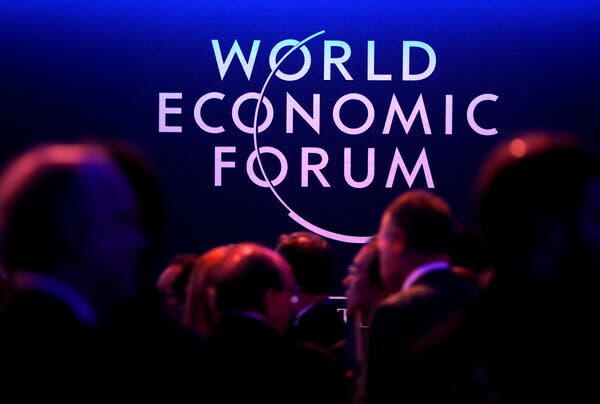 The World Economic Forum said this morning that it was postponing its annual meeting in Davos, Switzerland, from next month to “early summer,” citing the spread of the Omicron variant. The move suggests new uncertainties for business travel, yet another headache for C.E.O.s amid rising case counts and new questions about government efforts to contain the coronavirus. Meanwhile, U.S. stock futures are down sharply, following European and Asian markets.

Many businesses are becoming increasingly cautious. The World Economic Forum, after consulting with experts and the Swiss government, said it will instead hold virtual sessions next month. (Travel, business and otherwise, faces new pressures: Israel added the U.S. to its no-fly list, while the N.H.L. called off games involving cross-border travel until after Christmas.) In other developments:

The fate of a federal vaccine mandate for large companies became cloudier. On Friday, a federal appeals court lifted a legal block on the rule, though appeals to the Supreme Court were immediately filed. The next day, OSHA pushed back the deadline for full enforcement of the rule until February.

Another matter that may become more confusing is what counts as “fully vaccinated.” While the Labor Department doesn’t currently require booster shots as part of its rule for large companies, it is strongly encouraging them. Some local authorities, like New York City, have already said they plan to change the definition of fully vaccinated to include boosters, as are companies like Jefferies. On the other hand, the Olympics isn’t mandating boosters for athletes. Douglas Brayley, an employment lawyer at the law firm Ropes & Gray, suggested that companies are increasingly facing a difficult choice: “I wonder if there’s some reluctance to go back to people who they already had to cajole into getting the vaccine, ‘Oh, and by the way, please get one more shot.’”

Other challenges lie ahead. The spike in Omicron cases is straining America’s testing capacity, making it harder for employers who want to make regular Covid checks part of their office protocol. In Britain, the country’s health secretary, Sajid Javid, wouldn’t rule out further restrictions before Christmas.

Peng Shuai retracts her sexual assault claim. The Chinese tennis star told a Singaporean newspaper that she had never been sexually assaulted, apparently walking back an accusation made on social media against a top government official. Her disappearance after that post stirred worldwide concern about her safety and spurred calls to boycott the Winter Olympics in Beijing next month.

A Chinese A.I. giant revives its I.P.O. plans. SenseTime revised its listing plans, with a goal of trading on the Hong Kong stock market by year end. The company had pulled its I.P.O. after the U.S. imposed new sanctions on it over Beijing’s use of its products against ethnic Muslim minorities in the Xinjiang region.

Elon Musk puts a price tag on his taxes. The Tesla chief tweeted that he will end up paying over $11 billion this year — potentially the biggest tax bill in U.S. history — in an effort to knock back criticism that he paid little to no taxes in recent years. That said, he always faced a big tax liability because of Tesla stock options he was granted.

The fate of Tony Hsieh’s fortune is stuck in court. One year after the Zappos founder died from injuries from a mysterious fire, his $500 million estate remains the subject of legal fighting between his family and his friends, The Wall Street Journal reports. Challenges in sorting out the mess include sorting through promises to associates, some scribbled on sticky notes.

“Spider-Man: No Way Home” breaks box-office records. The latest Marvel film collected over $253 million in sales in the U.S. and Canada, for the third-highest opening weekend in Hollywood history. That gives some hope for the movie industry, as the pandemic and the rise of streaming services ate into theater ticket sales.

After Senator Joe Manchin, the West Virginia Democrat whose vote was crucial to passing President Biden’s $2.2 trillion social spending bill, said he would oppose the legislation as written, he did more than set off blowback from the White House. Manchin also forced many Wall Street prognosticators to quickly rewrite their forecasts for 2022.

The news will likely add more volatility to the market. Whether the bill is officially dead, delayed or poised for a major rewrite, investors must grapple with yet more political uncertainty on top of worries about the Omicron variant and inflation.

Goldman Sachs, for one, lowered its growth expectations. Strategists there told clients last night that it was cutting its real G.D.P. forecast for 2022, including to 2 percent in the first quarter from 3 percent. The Goldman team said Democrats may yet pass some provisions in the Biden bill, focused on manufacturing and supply chain issues, but were less likely to approve measures like extending the expanded child tax credit.

But Wall Street is likely to cheer the demise of some other provisions. The Goldman strategists said it was less likely now that corporate taxes would go up, having previously predicted that those higher rates would reduce the S&P 500’s earnings by 3 percent next year. Many investors also feared, as Manchin does, that the bill would have increased inflation, even as multiple economists said that likely wasn’t true.

A new U.S. surge. The C.D.C said that the Omicron variant’s rapid spread in the U.S. may portend a surge in infections as soon as January, but cases are already spiking, leading offices to cancel holiday parties, Broadway performances to be shuttered and college finals to be moved online.

The Omicron variant. The new Covid variant has been detected in dozens of countries. While Omicron appears to be able to partially evade antibodies, it could be less severe than other forms of the virus, and new laboratory studies indicate that vaccines, and especially boosters, may offer protection against severe disease.

Biden’s vaccine mandate. A federal appeals panel on Dec. 17 reinstated a Biden administration rule requiring larger companies to mandate that their workers get vaccinated against Covid-19 or submit to weekly testing by Jan. 4. A day later, the Labor Department said that it would delay that deadline until Feb. 9.

Pfizer vaccine in younger children. The company said that a low dose of its coronavirus vaccine did not produce an adequate immune response in 2- to 5-year-olds in ongoing clinical trials. The setback threatens to keep the vaccine from younger children for longer than many had hoped.

“Is the conservator making decisions in the best interest of the conservatee or the business manager who they owe a debt to?”

— Anthony Palmieri, the incoming head of the National Guardianship Association, on new revelations by The Times about a loan from Louise Taylor, who was Britney Spears’s business manager, and James Spears, who kept Spears in a conservatorship for years.

Suiting up for the Big Board

Meet the new Zegna. It’s going public by merging with a SPAC run by the former UBS leader Sergio Ermotti. The deal values Zegna — which will drop “Ermenegildo,” the first name of both its founder and his grandson, the company’s current C.E.O. — at about $3 billion. New investors will inject $760 million in new capital into the business, which the company may use in part to keep investing in its Italian textile supply chain. The Zegna family will still keep a roughly 66 percent stake.

Israel bars its citizens from traveling to the U.S. or Canada.