A select group of holiday shoppers on TikTok have some questions for big-box retailers this winter, most notably: Do you know what “oy” means, and are you sure you want to wish it on the world?

“I’m convinced that whoever is in the design department at Bed Bath & Beyond has both never met a Jew and doesn’t like Google that much,” said Emma Herman, 31, a dietitian in Miami who took to TikTok last month to vent her frustrations.

As she talked to her followers, she shuffled through a series of holiday pillow designs on Bed Bath & Beyond’s website: a Christmas tree truck piled high with dreidels, a blue wreath adorned with snowflakes and Stars of David, a “fa la la llamakkah,” a “don we now our Hanukkah sweaters” knit, a reindeer with menorah-like antlers. (“Deers have nothing to do with Hanukkah,” Ms. Herman added. “It’s a Christmas thing!”)

The experience of finding Hanukkah imagery transposed onto Christmas tropes seemed to resonate. Ms. Herman, who had a couple dozen TikTok followers before her viral post and is now over 1,000, racked up more than 300,000 views on her video.

The National Retail Federation estimates people will spend up to $859 billion in November and December, nearly 11 percent more than the same period last year. Not everyone wants to spend on mistletoe and Santa pillows, though. So national retail chains have attempted to broaden their inventory for those who observe holidays other than Christmas, whether Hanukkah, Kwanzaa or Lunar New Year — but their offerings sometimes displayed confusion about the spirit of those celebrations.

Last month, an Instagram account called Hanukkah Fails started posting screenshots of holiday merchandise seemingly designed by someone with a nontraditional understanding of Jewish holiday traditions. There was a “Matzo Matzo Man” T-shirt from the company Tipsy Elves (matzo is eaten on Passover); a “Challah at ya girl” sweater on TeePublic’s site (challah is made on Shabbat); a Hanukkah tea towel from Disney embroidered with Sabbath candles.

One Hanukkah pillow inscribed with, “Why is this night different from all other nights?,” a question recited at the Passover Seder, was taken down from the Michaels and Bed Bath & Beyond websites. 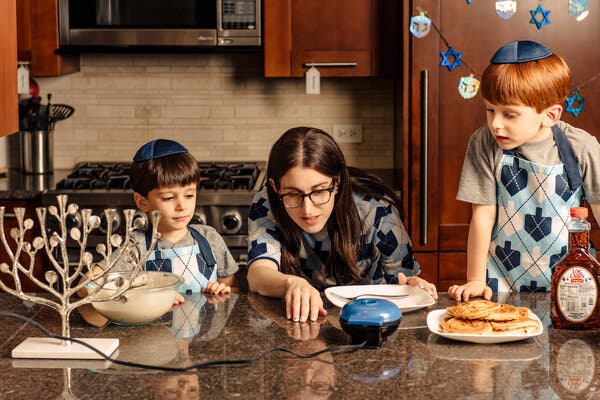 Rabbi Yael Buechler making waffles at home with her sons, Nadav Kramer, 3, left, and Lev Kramer, 5, in the Bronx.Credit…Clark Hodgin for The New York Times

“I’m happy to serve as any national brand’s Hanukkah ambassador,” said Yael Buechler, 36, a rabbi at the Leffell School, a Jewish day school in Westchester County. “Because they could definitely use a rabbi.”

Bed Bath & Beyond conceded that its collection of items targeted to different cultural groups sometimes missed the mark. “In our effort to provide a wide selection of Hanukkah items, some were included that shouldn’t have been,” the company said in an email. “As soon as our team was alerted, the items were removed.”

Michaels, which had also initially stocked the Hanukkah-turned-Passover pillow online, said it was open to hearing customer responses to its holiday inventory.

“While the overall feedback to our expanded, inclusive product lines has been positive, we don’t always get it right,” a spokesperson for the company said in an email.

This year, Michaels changed its protocols for approving holiday merchandise, ensuring that its employee resource groups, which have representatives from different cultures, have more input into products sold online, a process that they’ve found helpful when stocking up for Pride celebrations. Lowe’s and TJX, which owns the T.J. Maxx and Marshall’s brands, both said that their holiday wares were reviewed internally to confirm that cultural iconography was used appropriately.

But some shoppers are fed up: “There’s a Santa on Wayfair wearing a tallit,” Ms. Herman said, referring to a Jewish prayer shawl. “Tallits are kind of a big deal, it means you went through a bar mitzvah. Is St. Nicholas now a Jew, like, welcome to Jewish adulthood? ”

More than 150 years ago, American Jews faced the opposite problem. Families settling in U.S. cities found that December was filled with cheer for Christian families — caroling, decorations, presents — while Jewish children were left without much levity to distract from the winter gloom. One Cincinnati rabbi happened across a neighborhood Christmas celebration and realized that Hanukkah, a holiday without much religious significance, could benefit from festive traditions: songs, Maccabee costumes, gifts (the children got oranges, a rarity in the midst of a Midwestern winter).

“Hanukkah became a way for Jews to reaffirm their commitment to Judaism in the face of pressure to be Christian,” said Dianne Ashton, a historian and author of “Hanukkah in America.” “Families are concerned about keeping their children happy to be Jewish at this time of the year.”

Retailers were eager to meet those concerns with the tried-and-true American antidote to unhappy kids: more stuff. Musical menorahs entered the market starting in the 1950s, soon followed by Hanukkah sticker books and gelt-filled dreidels. Hallmark launched a line of cards for Jewish customers, called Tree of Life, in 1995. Today more than one million Hanukkah cards are exchanged in the United States annually, according to the company.

The ecommerce boom of the early 2000s gave rise to a flood of new products including dreidel-shaped waffle makers, latke-adorned snuggies, star of David-speckled pajamas and Grateful Dead Hanukkah bobble heads. Consumer enthusiasm picked up even more in 2013 when Hanukkah coincided with Thanksgiving, a rare holiday mash-up that can make it easier to gather families for gift exchanges, according to Rabbi Buechler. (This year, Hanukkah begins three days after Thanksgiving.)

The Buechler family made waffles with dreidel designs.Credit…Clark Hodgin for The New York Times

But as the Hanukkah inventory has swelled over the decades, it has also been met with critiques. “It’s an afterthought,” said Adam Cohen, 52, a television producer in Los Angeles. “A lot of times they’re copying what Christmas does. You had ‘Elf on a Shelf,’ so someone made ‘Mensch on a Bench.’”

Mr. Cohen took the opportunity to make his own, more culturally informed products. In 2009, he started selling an annual Nice Jewish Guys wall calendar. “There were these predictable calendars that showed menorahs or gefilte fish,” he said. “There was nothing really celebrating the culture, not just the history but the present-day culture. Where’s the calendar with the nice Jewish guy?”

Mr. Cohen went on to sell more than 10,000 calendars each year, including to major retailers like Urban Outfitters: “I was just making a calendar of what I know, and what there’s an absence of recognition for,” he added.

Like Mr. Cohen, other Jewish entrepreneurs found that the confusion of mainstream retailers presented an opening for their own holiday merchandise.

Take Rabbi Buechler, who in 2011 started Midrash Manicures, which makes nail decals customized for Jewish holidays — plagues for Passover, tiny shofars for Rosh Hashana, scales of justice for Yom Kippur. As she expanded her business, she focused on Hanukkah, making neon dreidel leggings and a cold-shoulder dreidel top that she wore to get her coronavirus booster shot.

“One of the themes of Hanukkah is ‘Pirsum HaNes,’ which means ‘publicizing the miracle,’” Ms. Buechler explained. “Any form of Hanukkah swag is a way of extending that theme.”

While Ms. Buechler’s business has grown, selling more than 1,000 sets of $14 nail decals this year, she has faced stiffening competition from national chains, which, she observed, seem to expand their Hanukkah collection each year. Still, the botched products from companies like Michaels and Bed Bath & Beyond remind Ms. Buechler that there’s a market for rabbi-approved merchandise like her own.

When the big brands misstep, she added, rabbis groan about it on social media. “It’s ‘here we go again, another national chain that hasn’t quite gotten Hanukkah right,’” she said. “Just give us a call, and we’re willing to help.”

In Canada, the Premier of Quebec Worries About the State of Hockey

Their Holiday Parties Are Just Getting Restarted

Markets and oil tumble as a new coronavirus variant brings back travel restrictions.

Check Also
Close
Featured Posts
In a Nonbinary Pronoun, France Sees a U.S. Attack on the Republic
1 hour ago

In a Nonbinary Pronoun, France Sees a U.S. Attack on the Republic

As concerts return to South Korea, fans are told not to sing along.
1 hour ago

As concerts return to South Korea, fans are told not to sing along.

The Week in Business: Choosing the Same Path
2 hours ago

For Ku Stevens, Running Is a ‘Profound Act’
3 hours ago

For Ku Stevens, Running Is a ‘Profound Act’