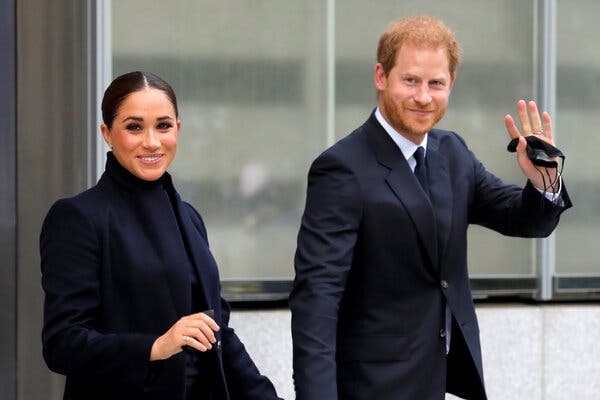 Prince Harry and Meghan, the Duchess of Sussex, are getting into the investment business. They are joining Ethic, a fintech asset manager in the fast-growing environmental, social and governance space, as “impact partners” and investors. Ethic has $1.3 billion under management and creates separately managed accounts to invest in social responsibility themes.

The couple could attract more attention to sustainable investing. Harry and Meghan can make E.S.G. investing part of pop culture in a way that, say, BlackRock’s Larry Fink can’t. “From the world I come from, you don’t talk about investing, right?” Meghan told DealBook in a joint interview with Harry. “You don’t have the luxury to invest. That sounds so fancy.”

“My husband has been saying for years, ‘Gosh, don’t you wish there was a place where if your values were aligned like this, you could put your money to that same sort of thing?’” Meghan said. They were introduced to Ethic by friends, she said.

Harry and Meghan said they hoped that their involvement would help democratize investing, making people — especially younger people — more deliberate in their choices and conscious of investing in sustainable companies. “You already have the younger generation voting with their dollars and their pounds, you know, all over the world when it comes to brands they select and choose from,” Harry said, suggesting it was a natural extension to do the same with investments.

Ethic was founded in 2015 and has tripled assets under management in the past year, Doug Scott, a founder of the company, told DealBook. Ethic runs screens on companies and sectors based on social responsibility criteria, including racial justice, climate and labor issues. Its user interface has more in common with the likes of Robinhood than traditional financial sites, and it has developed a new platform, “Sustainability for Everyone,” which scores a person’s portfolio along different dimensions.

The move is the couple’s latest corporate partnership since relocating to the U.S. Harry and Meghan moved to Los Angeles last year and later gave up official royal family duties. Seeking financial independence, they have signed production deals with Netflix and Spotify. Harry also recently produced a documentary series about mental health for Apple TV+ in connection with Oprah Winfrey and is writing a memoir.

Texas bans Covid vaccine mandates. An executive order issued by Gov. Greg Abbott yesterday bars virtually any vaccine mandate in the state, including those by private employers. The order will most likely be challenged in court.

Oil prices jump. U.S. crude prices have risen above $80 per barrel for the first time in seven years. Some analysts fear that supply shortages will keep oil prices relatively high.

The I.M.F. clears Kristalina Georgieva to remain in her post. The fund’s managing director found her position in doubt after an investigation last month concluded that she had manipulated data to placate China when she was at the World Bank. After a series of crisis meetings, the I.M.F.’s executive board yesterday expressed “full confidence” in Georgieva.

The Facebook whistle-blower will meet the company’s oversight board. Frances Haugen, the former Facebook product manager who testified before Congress last week and called for stricter regulation of the social media giant, will meet with the panel of experts that reviews the company’s content decisions.

HBO removes the “true crime” description from a docuseries that included an episode on WeWork. Lawyers for Adam Neumann, WeWork’s founder and former C.E.O., took a victory lap on the altered text in the show, “Generation Hustle.” WeWork is expected to go public at a $9 billion valuation through a merger with a SPAC this month.

The stock market’s profit engine may be slowing

The Delta variant of the coronavirus has hurt hiring and made policymakers’ lives more difficult. But investors are taking it in stride, because it appears to have had little effect on corporate profits.

Executives, having closed the books on the third quarter, may not be as buoyant as they were earlier in the year, with growing worries about supply chain issues and inflation slowing future profit growth.

Bottom lines are expected to have risen substantially. Analysts predict that earnings for companies in the S&P 500 rose nearly 28 percent in the third quarter, compared with a year ago, which would be the third-highest increase since 2010. But that’s not necessarily a positive sign for the overall economy.

The sectors showing the biggest jumps in earnings are the few that benefit the most from inflation. Companies in the energy and materials sectors — like Exxon and Dow — are expected to report huge jumps in profits for the third quarter. By contrast, companies that are reluctant to pass higher costs onto consumers, like Amazon and General Motors, are expected to have a disappointing quarter. Banks are in the middle, with trading businesses expected to fall short of last year’s windfall but consumer divisions picking up as the economy reopens.

Shortages and supply-chain issues loom large. On the most recent earnings calls at S&P 500 companies, some 70 percent warned that supply-chain issues would be a negative factor for sales and profits. “If we had the capacity to meet all of the demand,” Sean Connolly of the packaged food group Conagra told investors last week, “our numbers would likely have been even more impressive.” Expect to hear more of this on third-quarter calls, perhaps unseating inflation as the topic du jour. (Vaccine mandates are also likely to come up.)

Optimism is also in shorter supply. FactSet reports that 56 companies in the S&P 500 have issued third-quarter guidance above what analysts expected, which is higher than average but down from 67 in the previous quarter. The number of companies issuing negative guidance rose to 47 from 37 the quarter before. Is this a problem? Analysts expect the S&P 500 index to rise by 15 percent over the coming year.

“The human brain is a much scarier black box than any machine-learning algorithm.”

— Sabrina Howell of N.Y.U.’s Stern School of Business, on her new research that showed Black business owners were more likely to get Paycheck Protection Program loans from online lenders than from banks.

Acorns, the investment app for managing users’ “small change,” has hired its first chief investment officer: Seth Wunder. The appointment, which DealBook is the first to report, comes as the fintech company prepares to go public in a $2 billion SPAC merger.

Acorns, which emphasizes index funds and passive investing, will let users dabble in individual stocks and cryptocurrencies. Wunder, who is joining from black-and-white Capital, will help the company introduce these “more sophisticated investment opportunities,” Acorns said. The service will be offered for “higher subscription tiers,” said the company’s C.E.O., Noah Kerner. Acorns has a $3-per-month entry tier and last year introduced a $5-per-month family account. The company will limit how much of a customer’s diversified portfolio can be allocated to crypto and individual stocks.

Its investing approach is still more conservative than rivals like Robinhood, whose business model depends more on frequent trading. “One of the things that’s poorly understood in the market today is that when you’re abundantly active in your portfolio, there’s often a lot of unwarranted risk that people really don’t understand or realize that they’re taking,” Wunder said. “Our approach is to offer people the opportunity to invest in lots of different instruments over time, but doing it proportional to what’s a reasonable risk to take.”

China’s property problem, by the numbers

Evergrande isn’t the only Chinese property developer with huge debts it may be unable to pay. Fearing the fallout from policies aimed at cooling China’s costly and dangerously debt-ridden housing market, many are putting off buying homes altogether. With nearly three-quarters of household wealth tied to property, a loss of confidence in the market could drag down the overall economy, The Times’s Alexandra Stevenson and Joy Dong report. Here are three numbers that explain the scope of the problem:

Do you want to live forever?

The question brings up all sorts of issues, from the philosophical to the practical. Extending human life has also attracted billions in investment, which raises its own concerns.

“Death has never made any sense to me,” Oracle’s Larry Ellison once said. (He has poured millions into longevity research.) Jeff Bezos and Peter Thiel are investors in Unity Biotechnology, which focuses on ways to “slow, halt or reverse diseases of aging.” Google started Calico in 2013, a company that today describes itself as “asking difficult questions about how we age.”

Some of those questions include:

What do you think? Today, at 1 p.m. Eastern, join us for a DealBook Dialogue call on “The Business of Longevity” with David Sinclair, a Harvard researcher and biotech founder. You can submit questions live or when you R.S.V.P. Register here.

Past Pandemics Remind Us Covid Will Be an Era, Not a Crisis That Fades

In Shanghai, Teahouses Offer Both Community and Solitude

B.J. Novak’s Face Is on Products Worldwide. He’s Not Sure Why.

A Hot, Dusty Town in the Middle of Nowhere? We’ll Take It.
2 saat önce