NEW DELHI — The lanky figure lugging a green Orvis carry-on was instantly recognizable as he paused on the jetway after his overnight flight from the United States.

“Mr. Kerry,” waved a fellow passenger. “Are you here to save the climate?”

John Kerry, the former United States senator and secretary of state, is now a kind of pedigreed traveling salesman for the environment, shuttling from country to country, with an urgent pitch to save the planet.

He’s visited 14 countries in nine months, some of them more than once. He flies commercial these days and, at 77, the travel is tiring. But President Biden’s special climate envoy is under mounting pressure.

With just 40 days before leaders from around the world gather in Glasgow, Scotland, for a pivotal United Nations climate summit, Mr. Kerry needs to convince other countries to commit to sharply turn away in this decade from burning coal, oil and gas and cut the resulting carbon emissions, which are heating the planet to dangerous levels.

His sales approach is simple. “We’ve got to do what the science tells us to do,” he said.

But his task is enormous. Mr. Kerry is trying to reassert American leadershipand illustrate Mr. Biden’s claim that “America is back.” That’s a difficult proposition following the go-it-alone approach of former President Donald J. Trump, who questioned the science behind climate change and pulled the United States from the 2015 Paris climate accord, the only one out of 197 nations to withdraw.

Allies openly ask Mr. Kerry whether they can still count on the United States. “I said ‘Look, come next election, you may have Trump back,” R.K. Singh, India’s power minister said a day after meeting with Mr. Kerry. “So then what happens?”

Mr. Kerry’s mission is further complicated by political fissures at home and the fact that President Biden’s ambitious climate agenda may not survive a divided Congress.

Republican leaders argue that transitioning away from the fossil fuels that have underpinned the American economy for more than a century risks national security.

“John Kerry has been a disaster for a long time for our country,” said Senator John Barrasso of Wyoming, a member of Republican leadership and the top Republican on the Senate’s Energy and Natural Resources Committee. “There are ways that we can certainly protect the environment without hurting the economy — he apparently doesn’t believe that.”

Mr. Kerry described his decision to return to government as “what the fight of public life is all about.”

“I deeply believe that this is a major crisis for our world,” he said, as he relaxed in his hotel suite after a battery of meetings with Indian ministers and business leaders. “And this is a moment where we have a chance to do something about it. And who can say no to a president of the United States who asks you to do that at this particular moment in time.”

The wind is not at his back. 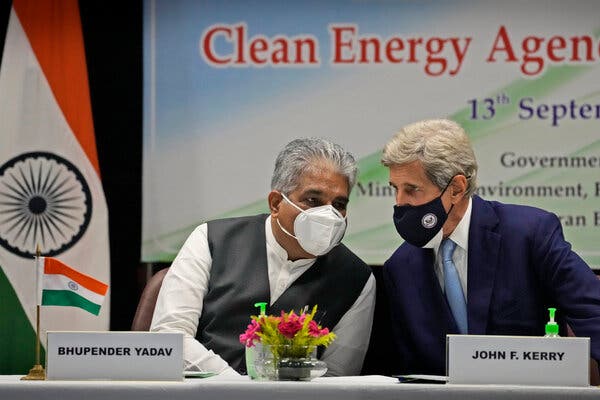 Mr. Kerry and Bhupender Yadav, the Indian Environment Minister, during a meeting in New Delhi this month. Credit…Manish Swarup/Associated Press

His trip last week ended without a commitment from India, the world’s third largest greenhouse gas emitting country, that it would raise its ambitions to fight climate change. He ended a recent trip to China, the top emitter, similarly empty-handed. Brazil, which plans to continue burning coal for the next 30 years and where deforestation of the Amazon is a major contributor to climate change, skipped a virtual climate meeting convened by Mr. Biden last week.

Richard N. Haass, president of the Council of Foreign Relations, said signs don’t portend well for Mr. Kerry’s efforts and the looming U.N. summit in November. “Glasgow will come up short,” he predicted.

Still, Mr. Kerry pushes on. He plans to meet again with China’s top climate diplomat, Xie Zhenhua. It will be the 19th discussion between the two men since January, according to his staff.

As part of the Paris accord, countries agreed to restrain the increase in average global temperature “well below” 2 degrees Celsius and, preferably 1.5 degrees, compared with temperatures before the Industrial Revolution. For every fraction of a degree of warming, the world will see more frequent, intense and deadly heat waves, wildfires, drought and floods as well as species extinction.

What’s more, a new analysis released last week by the United Nations found that the Paris commitment is insufficient; even if countries carry through on the promises they made in 2015, the global average temperature will rise 2.7 degrees Celsius above preindustrial levels by century’s end. “The world is on a catastrophic pathway,” United Nations Secretary General António Guterres said.

The goal at Glasgow is to compel the biggest polluting countries to commit to action that is more ambitious than outlined in the Paris accord.

Mr. Kerry said he believed that nations would rise to meet the challenge.

“I’m an optimist” he said. “I think most of the problems on Earth are caused by human beings. And if we cause them, we ought to be able to solve them or prevent them.”

In many ways, his career has been building to this moment.

As a senator from Massachusetts, Mr. Kerry attended the first United Nations climate change summit meeting in 1992 in Rio de Janeiro, where he declared the planet could not afford for poor countries to develop the way wealthier countries did, on a foundation of fossil fuels.

Mr. Kerry, backed up by his staff, testified on the Iran nuclear deal before the Senate appropriations subcommittee in 2015. Aides describe him as fixated on details.Credit…Stephen Crowley/The New York Times

In Congress, he championed several environmental efforts that faced opposition and ultimately crumbled, including an effort to raise auto fuel economy standards in 2002, and a sweeping climate bill in 2010.

“It has been a thread running through his career, even when the politics have not been favorable,” said David Wade, his former chief of staff who is now a lecturer at Yale University and a fellow at the Carnegie Endowment for International Peace, a Washington-based think tank.

As secretary of state during the Obama administration, Mr. Kerry was confident that the United States and China could cooperate on climate and end the “You go first. No, you go first,” stalemate that had stalled action for decades.

So he initiated secret negotiations, including hosting Chinese leaders at a Legal Sea Foods restaurant on the docks of Boston Harbor. That laid the groundwork for a joint pledge in 2014 by the United States and China to cut emissions, albeit at different paces. The following year in Paris, nations took the unprecedented step of pledging climate action in their own countries — an accord that Mr. Kerry helped craft.

Mr. Kerry’s approach to diplomacy remains largely the same today: optimistic and relentless, according to interviews with more than a dozen current and former aides and colleagues.

“He doesn’t believe in walking away, and that’s his strength as a negotiator. If the door is closed, he looks for an open window,” said Martin Indyk, Mr. Kerry’s former Mideast envoy.

Aides say he is focused on details, texting his staff late into the night to seek a country’s solar capacity statistics or economic data or with more obscure questions, like Mr. Modi’s stated spiritual connection to environmental issues.

A meeting with Chinese President Xi Jinping in Beijing in 2014.Credit…Pool photo by Greg Baker
Mr. Kerry with Mr. Biden and Vice President Kamala Harris in January as the president signed several executive orders, including limiting oil and gas leases.Credit…Anna Moneymaker for The New York Times

Friends and colleagues were not surprised when in January he accepted Mr. Biden’s offer to serve as the first presidential climate envoy.

Retirement never suited Kerry, who wants to be in the arena, said Thomas Vallely, a longtime friend who is a senior adviser for Mainland Southeast Asia at Harvard University’s Ash Center. “This is like bullfighting. He’s addicted.”

Upon his return to government, Mr. Kerry said he found that the Trump years damaged America’s credibility, saying it “was chewed up and spat out” after Mr. Trump’s decision to withdraw from the Paris agreement.

As a result, Mr. Kerry’s approach is a delicate attempt to try to understand what countries need, as opposed to making demands. In India, for example, he announced a partnership to help the country meet its goal of ramping up its renewable energy capacity.

He won’t even suggest what emissions target should be set by China, the biggest emitter, even as that country plans to develop 247 gigawatts of coal power domestically, nearly six times Germanyʼs entire coal-fired capacity. “I don’t want to be in a position where China reads it and they say, ‘Oh, there’s Kerry, telling us what we have to do.’”

Mr. Kerry and his team of about 35 policy experts have had some success. On Tuesday, President Xi Jinping announced at the United Nations that China will stop financing overseas coal projects, an issue that Mr. Kerry had made a priority during his discussions with Chinese leaders. Earlier this year Canada, South Korea and Japan raised their climate targets, all in large part because of prodding from the United States. And several administration officials said that President Biden’s announcement Tuesday that he intends to double aid on climate change to developing countries was a result of direct conversations with Mr. Kerry who argued that increasing climate finance will be critical to the success of the Glasgow summit.

Mr. Kerry insisted he is “hopeful” that the biggest economies will take meaningful climate action in Glasgow, if not because of the scientific imperative but because of market forces. Capital is shifting away from fossil fuels and towards new global investment in wind, solar and other renewable energy that does not emit greenhouse gases, he said. About 70 percent of the $530 billion spent worldwide on new power generation this year is expected to be invested in renewable energy, according to the International Energy Agency. Technology is improving, the costs of clean energy are dropping and markets are moving.

“You know, right now, everything’s a question mark,” Mr. Kerry said. But, he added, “I think the world is coming around.”

Mr. Kerry in April at a meeting on climate at the White House hosted remotely. Credit…Al Drago for The New York Times

The Deep History of Wentworth

Biden Declared the War Over. But Wars Go On.

Here’s how to help victims of the earthquake.
28 mins ago

Despite an enormous rescue effort, many people are waiting for help.
40 mins ago