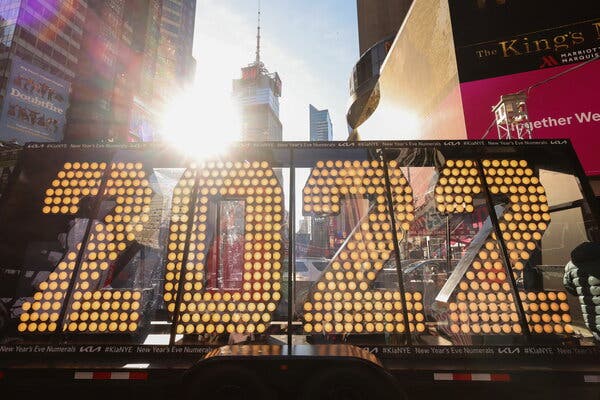 There are many reasons to hope for a brighter year ahead.Credit…Andrew Kelly/Reuters

It wasn’t all bad

Given that 2021 started with the Jan. 6 attack on the Capitol and is ending with the surge of yet another coronavirus variant, it’s easy to forget all the good that happened this year. Nearly nine billion vaccine doses have been administered worldwide, and almost 200 countries signed an agreement pledging to take action on climate change. (And, depending on your tastes, we got new seasons of “Ted Lasso” and “Succession.”)

Corporate America has slowly become more diverse, and is getting more so: Nearly 50 percent of all new members of S&P 500 companies’ boards were from historically underrepresented groups, according to the executive search firm Spencer Stuart, up from 22 percent the year before.

The past year also renewed our faith that good things can come at what seem like the worst of times. So as another pandemic year nears its end, we’ve decided once again to focus our last newsletter of the year (we’ll be back on Jan. 3) on some of the most promising developments of 2021 — and things to be hopeful about in 2022 and beyond.

The Supreme Court will hold a special hearing on Biden’s vaccine mandates. The Jan. 7 hearing is meant to expedite consideration of a vaccine-or-testing mandate aimed at large employers and a vaccination requirement for certain health care workers. At issue is whether the Biden administration’s use of executive power overstepped constitutional bounds.

A record number of Americans has signed up for Obamacare. Over 13 million people have bought health plans through the Affordable Care Act’s marketplaces for 2022, spurred by the pandemic and Congress lowering costs. But those gains may be fragile, with enhanced subsidies set to expire at the end of next year.

Amazon workers on Staten Island again try to unionize. Organizers at a warehouse on Staten Island said they had submitted more than 2,500 worker signatures to the National Labor Relations Board in support of a union election. Unlike previous efforts, this focuses on Amazon’s only fulfillment center in New York City.

Tesla faces a new investigation. The National Highway Traffic Safety Administration is examining a feature that allows drivers to play games on a Tesla’s touch screen while the vehicle is in motion, which critics say could lead to unsafe distractions. It’s the latest inquiry into potential safety issues with Tesla cars.

TikTok was the most popular internet site in 2021. The social media giant surpassed Google in visitors this year, according to the cloud infrastructure services provider Cloudflare. It’s another sign of how the short-form video site is overtaking older properties like Facebook, Amazon, Netflix and YouTube.

Remembering Carlos Tejada. The Times’s deputy Asia editor, Tejada died on Friday in Seoul at 49. He helped shape coverage of the pandemic that won a Pulitzer Prize, and was known for his deft editing and his fierce loyalty to his colleagues. We’ll miss him.

… and here’s some hopeful news

Investments in infrastructure are on the way. Last month, Congress approved a $1 trillion bipartisan bill to upgrade America’s roads, trains, electricity grid and other infrastructure. While it is unclear how these projects will be carried out, the legislation is the most significant effort in decades to solve long-term problems like relatively poor internet access and inefficient public transportation.

New Covid-19 treatments are coming. Yesterday, the Food and Drug Administration authorized Pfizer’s pills for Covid patients at high risk for severe illness, and it is expected to clear another treatment from Merck this week. The hope is these drugs significantly reduce hospitalization and death from Covid — and both can be administered at home, unlike current treatments that are typically administered in a hospital.

The world may be closer to nuclear fusion than ever. Though not everyone is comfortable with nuclear power, the promise of a fusion reactor producing far more energy than goes into it has huge potential in helping solve the climate crisis.. Investor interest in the technology has led to a growing number of start-ups that employ roughly 1,100 people and have raised a combined $1.9 billion. Commonwealth Fusion Systems, an M.I.T. spinoff, recently announced a successful test of a powerful magnet needed to unlock fusion technology. Most of these projects will probably fall short, but the research itself could prove invaluable down the road.

The Infrastructure Bill at a Glance

The bill receives final approval. The House passed the $1 trillion bill on Nov. 5 to rebuild the country’s aging public works system. The proposal is a central plank of President Biden’s economic agenda, which he signed into law on Nov. 15. Here’s what’s inside the bill:

Transportation. The proposal would see tens of billions of dollars in new federal spending going to roads, bridges and transportation programs. Amtrak would see its biggest infusion of money since its inception, and funds would be allocated to programs intended to provide safe commutes for pedestrians.

Climate. Funding would be provided to better prepare the country to face global warming. The Forest Service would get billions of dollars to reduce the effects of wildfires. The bill includes $73 billion to modernize the nation’s electricity grid to allow it to carry renewable energy.

Resources for underserved communities. A new $2 billion grant program is expected to expand transportation projects in rural areas. The bill would also increase support for Native American communities, allotting $216 million to the Bureau of Indian Affairs for climate-resilience and adaptation efforts.

Biomedical research may get a boost. Research in the early “translational” stage, when basic findings are applied to potential treatments, has long been notoriously difficult to finance. The pandemic has made matters worse. But relief may be on the way. While a bill to create government-backed bonds to finance private research — known as BioBonds — did not advance in the House of Representatives, the financial analyst behind the idea, Karen Petrou, is in talks with the White House, which is creating a new agency to speed up research and cures. Called ARPA-H and modeled after the Defense Advanced Research Projects Agency, the proposal has broad bipartisan support, according to a recent Morning Consult poll. So do BioBonds, Petrou said, adding that she hopes Congress will pass the measures early next year. (The White House did not respond to a request for comment).

Americans are starting new businesses at the fastest pace in years. The pandemic helped end a multidecade slump in new start-ups that had both stumped and worried economists. This year, business applications in the U.S. are on track to surpass 5.4 million, up from 4.3 million last year. Why? Perhaps the pandemic gave people more time to think, and because the economic upheaval it wrought created opportunities for small new businesses. Technology has also made it easier to become an entrepreneur, and access to capital has expanded.

Investors focus more on corporate political transparency. The Jan. 6 Capitol attack convinced major Wall Street investors that the money flowing from business’ coffers into politics, directly and indirectly, was a serious issue. This past proxy season, BlackRock and Vanguard backed disclosure frameworks modeled on standards from the Center for Political Accountability. State Street backed such proposals 75 percent of the time, up from about 45 percent last year. Bruce Freed, the center’s president, said that this sends the message to corporate America that “business as usual” won’t cut it anymore.

New purposes for A.I. are emerging. While plenty of corporate uses of artificial intelligence have drawn criticism, there are others that face much less controversy. One such effort is the Data & Trust Alliance, which has signed up the likes of CVS Health, Deloitte and G.M. and others to support using A.I. to detect and combat algorithmic bias. Last month, 193 countries signed a first-ever global agreement to devise a common framework for the ethics of A.I. More recently, a researcher unveiled technology that might be used to predict breast cancer in healthy people. And maybe next year, robots will make better calls in baseball games.

Hope remains for the movie theater industry. The fact that “Spider-Man: No Way Home” beat back the Omicron coronavirus variant to a more than $250 million opening weekend suggests that people still want shared cultural moments. That good fortune may not extend to all kinds of movies — but it suggests that the movie industry may be on its way to a new equilibrium.

Pigs still can’t fly — but maybe they will help us fly more safely. Amsterdam’s Schiphol Airport is using 20 pigs for a pilot project that aims to at reduce the number of birds striking planes. It is letting pigs roam on a plot between two runways, where they are meant to eat the leftover crops that often attracts geese.

Tags
Bi̇ll May New That Year

See the Real Live Man Who Grew Up in a Carnival

The S&P 500 falls into correction territory with its sharpest daily drop in a year.

Check Also
Close
Featured Posts
War May Loom, but Are There Offramps?
4 hours ago