LOS ANGELES — Entering this season, the Yankees had a gaping hole at shortstop. Gleyber Torres had struggled there and was moving back to second base. The Yankees were in luck, though, as a heralded free agent class of shortstops was hitting the free-agent market: Carlos Correa, Corey Seager, Trevor Story, Javier Báez had all been All-Stars and three of them had won a World Series.

The Yankees passed on all of them, trading for Isiah Kiner-Falefa, a sure-handed fielder not known for his bat.

Why? The team had yearned to improve its defense and the price tags of the free agents were extraordinary. Kiner-Falefa, who is under team control for two seasons, is making $4.7 million this year, while Correa, Seager, Story and Baez each signed contracts that paid them $23.3 million or more annually. At $35.1 million for this season, Correa is the second-highest paid position player in baseball.

But Hal Steinbrenner, the Yankees’ managing general partner, said in March that there was another reason to stay away from the top-shelf talent: “We do have two incredibleprospects that I’m excited to give a chance to.”

One of those prospects was Anthony Volpe, considered by many to be the organization’s shortstop of the future.

During the annual Futures Game, an exhibition of the sport’s top prospects held in the lead-up to Tuesday’s Major League Baseball All-Star Game, Volpe had a chance to show off the skills that he dreams of one day taking to the Bronx. 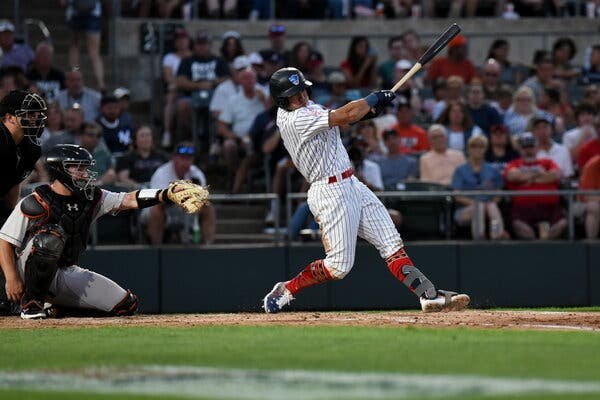 Volpe had a terrific season offensively in 2021, and while he got off to a slow start this season at Class AA Somerset, he has been hot in recent weeks.Credit…Somerset Patriots

“That’s obviously great to hear from someone like that,” Volpe said when told of Steinbrenner’s comments before Saturday’s game, in which he went 0 for 2 and made all the plays defensively at shortstop over three innings.

Volpe, 21, meant that sincerely. It seems almost too good to be true: He was an ardent Yankees fan growing up in Morristown, N.J., a town 40 miles west of Yankee Stadium, and he admired Derek Jeter, the Yankees’ Hall of Fame former shortstop and captain. He attended Jeter’s last All-Star Game, in 2014, with his father, as well as the Futures Game that year. As a child and now as a Yankees prospect, Volpe frequently pictures himself playing shortstop at Yankee Stadium, just like his idol.

“That’s the end goal that I’m working for and super excited,” he said.

The Yankees selected Volpe, a right-handed hitter who is listed at 5 feet 11 inches and 180 pounds, out of Delbarton School with the 30th overall pick in the 2019 draft, and they lured him away from a college commitment to Vanderbilt University with a $2.7 million signing bonus.

“People don’t really know this story, but when he was getting drafted, he wouldn’t talk to any teams during his senior year of high school just because he only cared about winning a state championship,” said infielder Max Burt, one of Volpe’s closest friends at Class AA Somerset. “And that’s exactly what he did. Winning is the first priority for him.”

Volpe’s first full season in the minor leagues didn’t come until 2021 because the pandemic canceled the previous season. In 109 games, he hit .294 with 27 home runs and a 1.027 on-base plus slugging percentage. Playing 30 minutes from his hometown with Somerset this season, Volpe started off slowly but has been on a tear since the start of June, raising his season totals to .253 with 12 home runs and an .812 O.P.S. through 77 games.

“He’s built for New York,” Burt said. “He’s built to play under the bright lights. Obviously being from this area, he’s had media and so much attention on a daily basis, and he’s handled it incredibly.”

Volpe was hitless in the Futures Game on Saturday but he had a solid day defensively at shortstop.Credit…Mark J. Terrill/Associated Press

Playing so close to where he grew up has had its perks: Volpe lives in his childhood home — but with a few new friends. His Somerset teammates, catcher Austin Wells (the Yankees’ first-round pick in 2020), outfielder Blake Perkins and Burt also stay there during the season. Volpe said his mother cooks for them and, after Sunday home games, the entire team is invited over.

“It’s a great atmosphere to play in and then come home to see the family,” he said, adding later, “It’s been a fun year.”

On the field, Somerset Manager Dan Fiorito said, Volpe combines discipline at the plate, power, an ability to hit the ball with the barrel of the bat, strong defense and speed on the bases. Volpe swiped 33 bases last season and already has more (35) through fewer games this year.

“He’s far ahead of the game at just 21 years old,” Fiorito said by email, “and we’re all so excited for his future.”

Added Volpe: “I just turned 21 this year and I don’t think there’s any 21-year-old in the world that couldn’t get better at everything. It’s really hitting, defense, just all over the game. I just want to keep learning and really never stop.”

A vote of confidence from Yankees ownership has Volpe pegged as the team’s shortstop of the future. That has made him a favorite of autograph seekers.Credit…Somerset Patriots

But ask Yankees officials and Volpe’s teammates about him and one of the most common themes is his demeanor. Fiorito said it was rare to find leaders in such young players and that Volpe is a “relentless competitor.” Burt said his friend has the same attitude whether he’s 0 for 4 with four strikeouts or 4 for 4 with four home runs.

“The way he goes about his business, the way he leads, within that clubhouse he impacts his teammates in a really positive way, the way interact with the fans,” Yankees General Manager Brian Cashman said. “I mean, he’s got that ‘it’ factor. I know that’s a cliché but it’s the best description I can provide. You have five tools you’re trying to grade, and then you do the performance and then you get that extra gear, which is makeup.

“And he’s got that extra gear. That comes with the package and that’s credit to his mom and dad. He’s going to be a successful player at the highest level, and we’d certainly would love it to be with us.”

The decision to bet on Kiner-Falefa, who is from Hawaii but also grew up watching the Yankees and wanting to be like Jeter, has proved worthwhile for New York this season. Along with other upgrades, he has helped the Yankees become the best team in baseball. Entering Saturday, they had a 62-28 record and a 12 ½ game lead in the American League East.

There is a kid from New Jersey who loves Jeter that hopes he can do the same one day, too.

9 hours ago
Check Also
Close
Featured Posts
In Austin, Recovery From Winter Storm Is Slow and Piecemeal
10 mins ago