John Madden spent a decade on N.F.L. sidelines as a coach, three decades on the air as a commentator and many days in a recording studio for the video game named after him.

Few people have showed as much versatility and dedication to football as Madden, the Hall of Fame coach who died Tuesday at age 85. His contributions to the N.F.L. and video game culture have made him a beloved figure in the league and beyond, transforming him into perhaps football’s most recognizable ambassador.

These photos and videos from Madden’s career highlight his love for, and contributions to, the game. 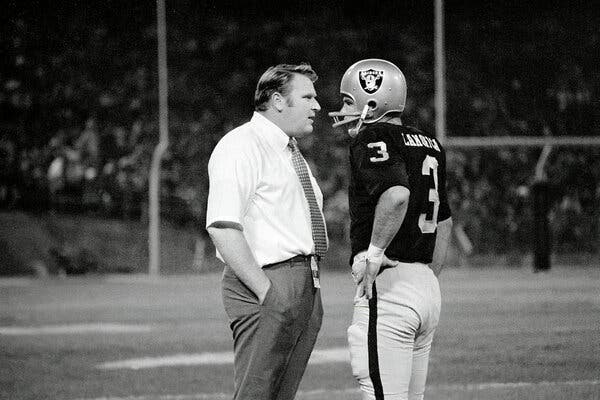 The Oakland Raiders hired Madden as a linebackers coach in 1967 and promoted him to head coach two years later at age 32. Above, with quarterback Daryle Lamonica in 1970.

Madden’s Raiders beat the Minnesota Vikings, 32-14, in Super Bowl XI in 1977 in Pasadena, Calif. It was Madden’s only Super Bowl appearance as a head coach, but he led the Raiders to eight playoff appearances in 10 seasons.

Madden was on the sideline for one of the most memorable — and controversial — plays in N.F.L. history, on Sept. 10, 1978. Raiders quarterback Ken Stabler fumbled the ball forward to avoid a sack with time running out, Pete Banaszak pushed the ball farther ahead and Dave Casper recovered it in the end zone. The Raiders beat the San Diego Chargers, 21-20.

“The Oakland Raiders have scored on the most zany, unbelievable, absolutely impossible dream of a play,” Bill King, the Raiders’ radio broadcaster, announced. “Madden is on the field, he wants to know if it’s real. They said, ‘Yes, get your big butt out of here.’ He does. There’s nothing real in the world anymore. This one will be relived, forever.”

Indeed. The N.F.L. later changed its rule on forward fumbles.

Madden was a natural hosting “Saturday Night Live.” In this 1982 sketch, he interviewed the Cincinnati Bengals (including Eddie Murphy).

In the broadcast booth

Never at a loss for words, Madden partnered with the laconic Pat Summerall for 21 years, beginning in 1979, calling N.F.L. games for CBS and Fox. Above, Madden and Summerall in 1986.

He also teamed up with Al Michaels on both ABC and NBC, beginning in 2002, until he retired after Super Bowl XLIII in 2009.

Madden was the first sportscaster to work for all four major networks. He was also the sportscaster who brought a turducken (a turkey stuffed with duck stuffed with chicken) into prime-time sports coverage. In 1989, he created his own award for the most valuable player on Thanksgiving Day.

Above, some of the Detroit Lions got to sample Madden’s turkey — with extra legs attached — after their Thanksgiving game in 1999.

The Hall of Fame

“It’s been a great ride,” Madden said as he was inducted into the Pro Football Hall of Fame in 2006. The happiest moment of his life, he said, was being carried on the shoulders of his Raiders players after winning the Super Bowl.

“I ride on the shoulders of hundreds of friends: coaches, players, colleagues, family,” he said, adding, “This has been the sweetest ride of them all.”

Riding the bus into retirement

Madden, who had a widely known fear of flying, traveled the country in his motor coach, which itself became a famous vehicle. After leaving broadcasting, Madden was a consultant to the N.F.L. commissioner, Roger Goodell, together here in 2010.

Madden with former President George W. Bush and his wife, Laura Bush, during the national anthem at Super Bowl XLV in 2011.

Madden had been a fit for the unruly Raiders. “I was never going to coach any other team,” he said. The team, now based in Las Vegas, paid tribute to Madden on Tuesday at Allegiant Stadium.

Singapore charges a man accused of lending out his vaccination record, and other international news.

As Omicron Spreads, Officials Ponder What It Means to Be ‘Fully Vaccinated’

At Least 6 Killed in Crush at African Cup Match

The Prophet of the Deal

There Is Plenty to Learn From an Election, Even if No One Wins

Check Also
Close
Featured Posts
Why Is North Korea Suddenly Launching So Many Missiles?
7 mins ago

Why Is North Korea Suddenly Launching So Many Missiles?

War May Loom, but Are There Offramps?
4 hours ago

Caught on a Hot Mic: Biden Has Harsh Words for Peter Doocy of Fox News
5 hours ago