A former bobsledder filed a class-action suit against the sport’s national governing body on Wednesday, claiming the organization failed for decades to warn athletes about or protect them from brain injuries.

William Person, who competed for the United States from 1999 to 2007, filed the lawsuit in a state court in California against U.S.A. Bobsled and Skeleton, the organization that oversees those two sports in the United States.

In the lawsuit, Person’s lawyers argued that the bobsled organization knew as long ago as 1983 that the sport could cause serious brain injuries, which can lead to significant and irreversible medical conditions, but did not properly share the information with its athletes or adequately work to protect their health and safety.

Person and his lawyers asked the court to certify a class of plaintiffs that will seek compensation from U.S.A. Bobsled and Skeleton. They asked for that compensation to include a fund that will pay for intensive medical monitoring of former athletes as well as “the establishment of a Court-Supervised Compensation program for those individuals who have already been diagnosed, treated, and or harmed (including death) by brain injury, including neurodegenerative and behavioral disorders and diseases.”

A spokesman for U.S.A. Bobsled and Skeleton said Wednesday afternoon that officials had just received the complaint and were “looking into it.”

In a statement released by his lawyer, Person said: “The number of sled athletes I trained and competed with that are currently dealing with brain injuries from our time bobsledding is incredible. Individuals who were tremendous competitors and athletes are living with depression, dementia, and some are taking their own lives.”

Person is represented by Jason Luckasevic, a Pittsburgh lawyer who was involved with some of the initial litigation against the N.F.L. in connection with its treatment of players later found to have chronic traumatic encephalopathy, also known as C.T.E. The degenerative brain disease is connected with both mild and severe traumatic brain injuries. The litigation ultimately led to a $1 billion settlement with the league. 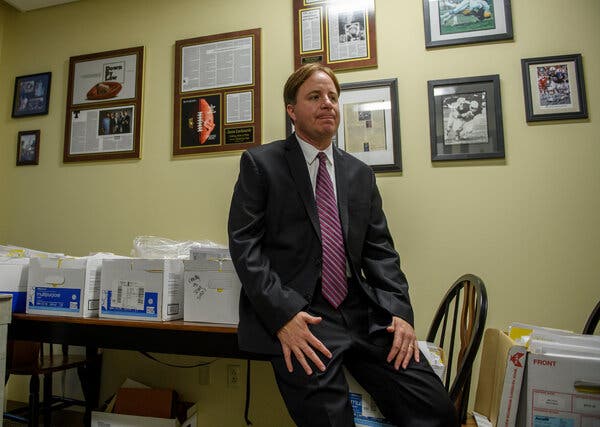 Jason Luckasevic, the lawyer for William Person.Credit…Jeff Swensen for The New York Times

In March, Dr. Ann McKee, a leading neuropathologist and the director of Boston University’s C.T.E. Center, found that Pavle Jovanovic, a former Olympic bobsledder who killed himself last year, had C.T.E. McKee has previously found the disease in the donated brains of scores of deceased football players.

Jovanovic hanged himself in his family’s metal works shop in central New Jersey in May 2020 after years of suffering from substance abuse, symptoms associated with Parkinson’s, such as uncontrollable shaking, and mood disorders. He was 43.

Later that year, The New York Times published a series of stories on former athletes in bobsled and skeleton who have struggled with similar symptoms. Jovanovic was the third elite North American bobsledder to kill himself since 2013. In 2017, Steven Holcomb, who piloted the American bobsled known as the “Night Train” to the Olympic gold medal in 2010, was found dead in Lake Placid, N.Y., from an apparent overdose of alcohol and sleeping pills.

In recent years, an increasing number of current and retired athletes in sliding sports have said they suffer chronically from many of the same conditions that plague football players and other contact sport athletes. They deal with constant headaches, a heightened sensitivity to bright lights and loud noises, forgetfulness and psychological problems.

In a statement last year, Aron McGuire, chief executive of U.S.A. Bobsled and Skeleton, said the organization “takes athlete safety very seriously. We recognize that there are inherent risks in all sports. We emphasize education and prevention first when it comes to injuries, which includes brain injuries.”

Officials said that the organization used the latest science, technology and protocols to monitor the health of its athletes and that it was trying to connect with former participants in the sport.

“We are actively working on expanding our alumni database and strengthening relationships with former athletes,” McGuire said. “Our athletes matter to us well beyond their athletic careers. We want them to remain involved, and to seek help if needed.”

How Accurate Are At-Home Covid Tests?