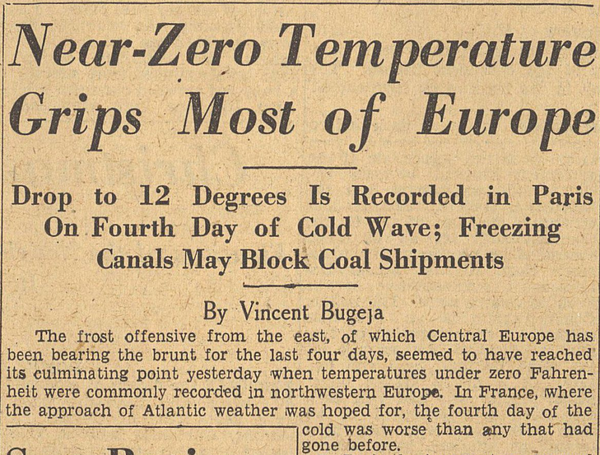 The frost offensive from the east, of which Central Europe has been bearing the brunt for the last four days, seemed to have reached its culminating point yesterday when temperatures under zero Fahrenheit were commonly recorded in northwestern Europe. In France, where the approach of Atlantic weather was hoped for, the fourth day of the cold was worse than any that had gone before.

In Paris the temperature dropped to 12 degrees, the lowest so far, while temperatures hovering about zero were reported from northern France, Belgium and Holland, and minus temperatures from southwestern France and the Pyrenees areas.

The canals of Holland, Belgium and northern Germany, which began to freeze early this week, were reported completely blocked for in-land navigation. The canals of northern France also were well on the way to becoming useless as waterways yesterday, auguring further complications for transport of the much-needed coal from the northern mining areas.

However, officials of Electricity of France declared optimistically that even if the canals are frozen the steam generating stations have sufficient stocks to maintain the supply of power under the present scale of restrictions. These now include later restoration of the current supply on days when power is cut off during the daylight hours and further cuts without warning whenever the use of electrical radiators is found to be drawing too heavily upon the supply.

The cold, while bringing distress and discomfort to thousands of Parisians and other city dwellers, is proving a boon to skaters as ponds are frozen hard. Hundreds of winter sports enthusiasts had the first innings of the season on the artificial lake of the Bois de Boulogne, which yesterday was covered by ice over six inches deep.

Weather bureau predictions on Wednesday of cloudiness, lower temperatures and snow were borne out yesterday. Fogs and snow falls, with rising temperatures, were reported from Scotland, the Channel coastlines and northern Belgium, heralding a change of weather which may reach the Paris area today.

The biggest falls of snow yesterday were reported from the Alpine and north Apennine regions of Italy where even low ground was covered with more than three feet of snow, playing havoc with road and rail transport.

For most Europeans the first winter frost, which usually is not expected before January, has turned Christmas cheer into gloom. With no coal, little firewood and severe electricity restrictions, the mass of Frenchmen, Belgians, Dutch and Germans have nothing to look forward to as the festive season approaches except the change in the weather forecast by the appearance of cloud, fog and snow flurries in the westernmost tip of Europe.

Inside the Campaign to Save an Imperiled Cambodian Rainforest

Secret Charms and 7th Sons: ‘The Cure’ Is Alive and Well in Ireland

Undeterred by Omicron, Tourists Seek Sun in a Welcoming Spain

Check Also
Close
Featured Posts
Amazon unveils the title for its big-budget ‘Lord of the Rings’ streaming series.
2 hours ago

Chicago Public Media is set to acquire The Chicago Sun-Times.
2 hours ago