SANTA MONICA, Calif. — Their bodies were found on public benches, lying next to bike paths, crumpled under freeway overpasses and stranded on the sun-drenched beach. Across Los Angeles County last year, the unsheltered died in record numbers, an average of five homeless deaths a day, most in plain view of the world around them.

Two hundred eighty-seven homeless people took their last breath on the sidewalk, 24 died in alleys and 72 were found on the pavement, according to data from the county coroner. They were a small fraction of the thousands of homeless people across the country who die each year.

“It’s like a wartime death toll in places where there is no war,” said Maria Raven, an emergency room doctor in San Francisco who co-wrote a study about homeless deaths.

An epidemic of deaths on the streets of American cities has accelerated as the homeless population has aged and the cumulative toll of living and sleeping outdoors has shortened lives. The wider availability of fentanyl, a particularly fast-acting and dangerous drug, has been a major cause of the rising death toll, but many homeless people are dying young of treatable chronic illnesses like heart disease.

More than ever it has become deadly to be homeless in America, especially for men in their 50s and 60s, who typically make up the largest cohort of despair. In many cities the number of homeless deaths doubled during the pandemic, a time when seeking medical care became more difficult, housing costs continued to rise and when public health authorities were preoccupied with combating the coronavirus. 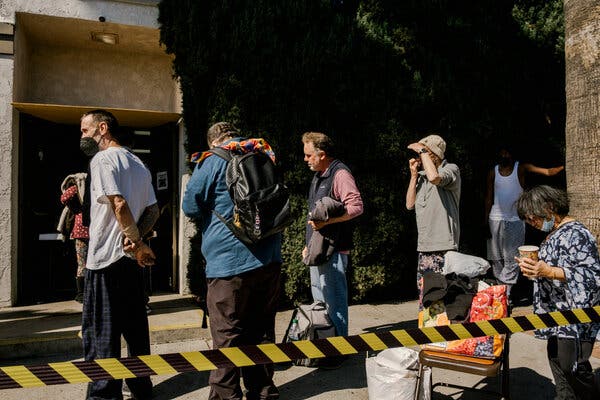 Of the nearly 2,000 homeless people who died in Los Angeles County last year, 383 died on the city’s streets, alleys and sidewalks, according to the coroner.Credit…Mark Abramson for The New York Times

Austin, Denver, Indianapolis, Nashville and Salt Lake City are among the cities where officials and homeless advocates have said they have been alarmed by the rising number of deaths.

But the crisis is most acute in California, where about one in four of the nation’s 500,000 homeless people lives.

The process of tallying homeless deaths is painstaking, involving the cross-referencing of homeless databases and death reports. But based on data from the handful of California’s 58 counties that report homeless deaths, experts said that 4,800 is a conservative estimate for last year.

In Los Angeles County, the homeless population grew by 50 percent from 2015 to 2020. Homeless deaths have grown at a far faster rate, an increase of about 200 percent during the same period to nearly 2,000 deaths in the county last year.

“These are profoundly lonely deaths,” said David Modersbach, who led the first public study of homeless deaths in Alameda County across the Bay from San Francisco.

In some cases, bodies are left undiscovered for hours. Others are unclaimed at the morgue despite efforts to reach family members. In San Francisco, where people sleeping in cardboard boxes, tents and other makeshift shelters are a common sight, the body of a homeless man who died on a traffic median last spring lay for more than 12 hours before being retrieved. “Guy lay dead here & no one noticed,” said a cardboard sign left at the scene.

Those who sleep on the streets speak of the wear that it imposes on the body, of several untreated illnesses and the loneliness of being surrounded by pedestrians who ignore you.

Billy, a metal worker and carpenter from New Jersey who now sleeps in the narrow alleys behind Venice Beach in Los Angeles, constantly feels the reminders of his previous jobs. At 50 he has chronic pain from an accident while trimming trees, treating it with a jumbo-size bottle of Aleve he keeps in his backpack.

He has overdosed twice from heroin, revived both times with the drug naloxone, and has watched as friends have disappeared around him.

“I can name 30 or 40 people who have died of overdoses and most of them were in my demographic,” said Billy, who did not want his last name published because he said it would embarrass his three grown children.

A homeless encampment along Glendale Boulevard within the Echo Park neighborhood of Los Angeles.Credit…Mark Abramson for The New York Times
Lydia Sussman and Lisa Mazzocco drove around the neighborhood of North Hollywood as part of Los Angeles’s 2022 homeless count.Credit…Mark Abramson for The New York Times

Los Angeles County voted overwhelmingly in 2017 to raise its sales tax and generate a projected $3.5 billion over 10 years for homelessness programs. Since then the county has housed 78,000 people.

And once on the street, mental health, drug abuse and general medical well-being can spiral out of control. Mr. Modersbach said he had been struck by how many homeless people were dying of diseases outside of hospitals or other clinical settings.

“To die of heart disease, liver disease, respiratory diseases — on your own — is pretty shocking,” he said.

Of the 809 homeless deaths from 2018 to 2020 in Alameda County, according to the study, one-quarter were from drug overdoses, half were from heart attacks, cancer, strokes and chronic illnesses, and the rest were from accidents, suicides and homicides. In Sacramento County at least three homeless people froze to death last year.

A key distinction among the homeless population today is the graying of the destitute.

Margot Kushel, a doctor specializing in homeless care, has tracked the rise of the average age of homeless people in the San Francisco Bay Area from their mid-30s three decades ago to their mid-50s today.

But even that rise in age does not tell the full story of their vulnerability, she said. Homeless people in their 50s are showing geriatric symptoms: difficulty dressing and bathing, visual and hearing problems, urinary incontinence.

A quarter of the homeless people she began studying nine years ago are now dead. The median age of death was 63, well below the average U.S. life expectancy of 77.

Across California, homeless deaths are overwhelmingly among men, and especially Black men who are dying on the streets at rates far disproportionate to their share of the general population. In Los Angeles County, men make up 67 percent of the homeless population but 83 percent of homeless deaths. In San Francisco, men in their 50s have the highest rates of overdose deaths among all age deciles.

Keith Humphreys, a Stanford psychologist, said the issue of death and despair among older men was underappreciated and understudied. He said society should ask the question: “Can we help men from dying so much?”

David Brown, 59, a former bus driver and fast-food employee in San Francisco who is currently enrolled in a rehabilitation program at the Salvation Army, describes the circumstances that put him on the streets as a life’s accumulation of woes. The knee problems from cramming his tall frame into the bus driver’s seat. The type 2 diabetes. The prison terms he served for burglary. A lifetime struggle with alcoholism and drug abuse.

So many friends died in shootings around the time of the crack epidemic in the 1980s and from overdoses on the streets that he feels entirely bereft.

Pamela Prickett, a sociologist who has studied death records in Los Angeles, said one measure of male isolation is that men’s bodies go unclaimed at the morgue at twice the rate of women. The rates that bodies go unclaimed, which have been climbing since the 1970s, are highest among men in their 40s and 50s.

“There are more people not getting married or getting divorced and not getting remarried,” Ms. Prickett said. “So we find lots of loners.”

Vivek Murthy, the U.S. surgeon general, said he had seen a pattern of men being ill-equipped to handle “triggers” in life such as illness and losing a job or a spouse.

“As men get older they tend to be less good at building and maintaining relationships,” he said. “When people do not have a safety net to catch them in the form of community and strong healthy relationships, it’s much more likely they end up struggling with substance use disorders, with mental illness and homelessness.”

Mr. Perez, who lives in a tent in North Hollywood, spoke to a church volunteer about temporary housing.Credit…Mark Abramson for The New York Times
Growing up, Mr. Perez had dreams of becoming an actor or playwright. “There’s a certain posture that you take when you are homeless,” he said. “You lose your dignity.”Credit…Mark Abramson for The New York Times

Ivan Perez, 53, is philosophical about what caused his life to go off the rails. His wife’s miscarriage and their marriage that fell apart. A marijuana habit that sank his career as a stockbroker. Prison time for an assault when he was high. Gambling.

“Being alone you kind of have no excuses to say it’s my wife’s fault, it’s my mom’s fault, it’s society’s fault,” Mr. Perez said.

In recent months he has slept on the streets in a tent near the North Hollywood subway station. The soundtrack to his life, he said, is the hissing of passing trucks next to his tent and the swoosh of street cleaners.

“There’s a certain posture that you take when you are homeless,” he said. “You lose your dignity.”

Mr. Perez remembered the hopes he had when he was younger of becoming an actor or a playwright.

“I tried to do all the right things and it blew up in my face,” he said.

“What a raw deal this life turned out to be.”

How a Manhunt Unfolded: An Alert, a Tweet, a Call From the Suspect