UPATA, Venezuela — His opposition to Venezuela’s authoritarian leader had left him bloodied by government thugs, forced him into hiding in a foreign embassy and pushed him into a nearly two-year exile in Italy, where he sold bread in a train station as he thought of home.

Américo De Grazia’s political defiance had also cost him his marriage and his savings. And yet here he was, back in his hometown in southeastern Venezuela, sweating through his shirt sleeves on stage — one of thousands of opposition candidates running in an election this Sunday that they are almost certain to lose.

“We are in a time of turbulence,” Mr. De Grazia, 61, told voters as drums beat behind him, “and that demands we fight.”

The political parties who oppose Venezuelan’s autocratic leader, Nicolás Maduro, have for years refused to participate in elections, arguing that to do so would legitimize a man who has spent nearly a decade jailing enemies, detaining journalists, co-opting political parties and banning key opposition figures from office, all as the country has fallen into an economic and humanitarian crisis.

But on Sunday, the opposition will make a return to the ballot box, putting up candidates in gubernatorial and mayoral races across the country, an about-face they say is meant to rally a disillusioned electorate ahead of a future presidential vote, which should legally take place in 2024. 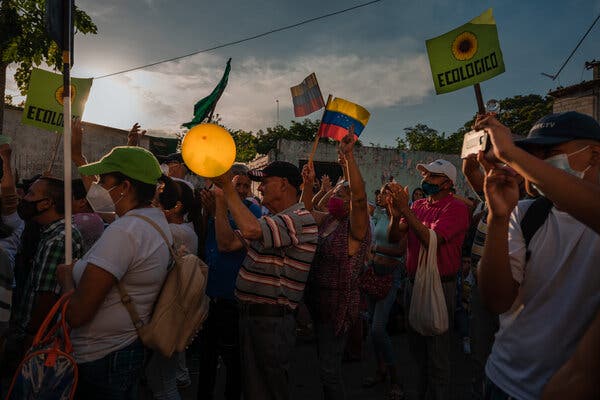 Supporters of Mr. De Grazia cheering during a speech.

Mr. De Grazia’s political defiance cost him his marriage and his savings.

The conditions — while nominally better than in past years, according to the nonpartisan Venezuelan Electoral Observatory — are far from freely democratic, and the shift is a gamble for the opposition.

Mr. Maduro, who faces both economic sanctions and an investigation in the International Criminal Court, is hungry for democratic legitimacy, and he is likely to use the election to push the United States and the European Union to ease their positions against him.

Supporters of Ángel Marcano, the candidate for the ruling party, gathering for a rally in downtown Ciudad Bolívar.
A warehouse with the former President Hugo Chavez’s likeness emblazoned on the front.

But the shift is also a sign of just how desperate many Venezuelans are for anything that looks like a shot at change. And Mr. De Grazia’s fight to become governor of one of the country’s largest states is emblematic of that desperation.

“This election is not free, not fair, not transparent, nothing like that,” he said over lunch one day after a campaign rally where he handed out tiny pieces of paper bearing his name, face and personal phone number — homespun campaigning in difficult times. But, “to beat this regime you have to confront it.”

Bolívar, a sprawling state in Venezuela’s southeast, is home to steel and aluminum plants and large deposits of gold, diamonds and coltan. Despite these resources, its people have suffered greatly amid the country’s economic decline. Ninety-five percent of the nation now lives in poverty, according to the Universidad Católica Andrés Bello in Caracas.

A couple making a pot of soup that will feed over a dozen children in their community in the state of Bolivar.
Roxana Sánchez, 20, with her son, Anthony, 7 months, who a doctor in Bolivar diagnosed with severe malnutrition, with the boy weighing little more than his birthweight.

In interviews in six municipalities across the state, many people said that an influx of dollars that began two years ago, after Mr. Maduro’s decision to relax economic regulations that had once defined his government, had percolated little beyond the richest families.

Mr. De Grazia is the son of Italian immigrants who started a string of bakeries in Bolívar in the 1950s. The original shop, Panadería Central, is still open across the street from the home where Mr. De Grazia lives with his mother, who runs the bakery.

He entered politics at 14, and eventually became a vocal critic of the governments of Hugo Chávez and his successor, Mr. Maduro, who held themselves up as champions of a socialist revolution.

Mr. De Grazia’s career has often focused on workers’ rights and corruption in the mining industry. He was a congressman for a decade, and said that he had been beaten up at least four times in the National Assembly. In the last instance, the results of which were caught on camera in 2017, men wearing ski masks left him bleeding on the legislature’s patio.

In 2019, he supported a decision by the head of the National Assembly, Juan Guaidó, to declare himself interim president, a move backed by the United States and dozens of other countries.

Afterward, Mr. Maduro’s government issued capture orders for Mr. De Grazia and many other opposition figures, forcing him to flee. He went first to the Italian Embassy, where he lived for seven months, and then to Italy, where he worked in a bakery run by one of his seven children.

It was around that time that his wife issued an ultimatum: Leave politics or we split. They split. “She could no longer take that life,” he said. “This is part of the price.”

But in Italy, Mr. De Grazia became increasingly convinced that the opposition coalition he once backed had no plan to move beyond a stalemate. He said that electoral abstention had left the coalition disconnected from voters and almost weaponless in the fight for fairer election conditions in 2024.

In February, he announced that he would participate in this year’s vote. He left the coalition, and was booted from the party he joined at 14, called Causa R. In April he declared his candidacy for governor.

Several months later, much of the coalition that had rejected him declared that they, too, would participate in the vote. Among the candidates running this year is David Uzcátegui, of Miranda State, who called abstention “an error.”

“The vote is an instrument you can fight with,” he said.

Mr. De Grazia and many other opposition candidates have limited chances of winning. In a report ahead of the vote, the Venezuelan Electoral Observatory said that while the government had allowed a broader spectrum of participation in this election than in past years, it continued to “restrict full freedom to exercise suffrage” in myriad ways, among them the illegal use of public funds to campaign for the ruling party.

Hundreds of political prisoners remain locked up, while many voters fear they will lose benefits if they don’t cast a ballot in favor of Maduro-backed candidates.

Takeaways From the 2021 Elections

A G.O.P. pathway in Virginia. The win by Glenn Youngkin, who campaigned heavily in the governor’s race on education and who evaded the shadow of Donald Trump, could serve as a blueprint for Republicans in the midterms.

Democratic panic is rising. Less than a year after taking power in Washington, the party faces a grim immediate future as it struggles to energize voters and continues to lose messaging wars to Republicans.

A new direction in N.Y.C. Eric Adams will be the second Black mayor in the city’s history. The win for the former police captain sets in motion a more center-left Democratic leadership.

Mixed results for Democrats in cities. Voters in Minneapolis rejected an amendment to replace the Police Department while progressives scored a victory in Boston’s mayoral race.

The opposition vote is also divided among many candidates in Bolívar and elsewhere, a situation that is likely to help deliver victories to Mr. Maduro. .

Mr. De Grazia, who has spent his savings — around $12,000 — on his campaign, claims that even if he loses, the effort will have been worth it.

At the rally in Upata recently, he stood before more than 200 supporters, many of them in T-shirts bearing the name of his party, Ecólogico. A bouquet of sunflowers lay at the base of the stage, green balloons swayed from the rafters, and Mr. De Grazia dared to go in his speech where many would not.

“Our fundamental question for Maduro is: Where is the gold that has been stolen from Bolívar?” he said. “They cannot continue to rob us of gold, diamonds and coltan and leave us without water, without health care, without services, without transport, without education.”

At another election event, Carmelis Urbaneja, 50, a teacher, said that Mr. De Grazia had inspired her to run for local office for the first time ever. “We have lost everything,” she said. “What else do I have to lose?”

But Mr. De Grazia’s critics say that his gamble isn’t worth it.

Among the most vocal opponents of participation is Mr. De Grazia’s former political mentor, Andrés Velásquez, who ran for governor of Bolívar in 2017.

According to the initial vote count published on the website of the national electoral council in 2017, he won.

But the results soon disappeared, according to local and international media reports at the time, and then the government candidate and current governor, a general named Justo Noguera, was sworn in during a surprise midnight ceremony.

Last year, a member of the national electoral council, Juan Carlos Delpino, said publicly that the count had been manipulated.

Bolívar, Mr. Velásquez claimed, was just too important economically for the government to let an opposition candidate take it over.

Mr. Velásquez said that the same election fraud could happen to Mr. De Grazia — and that Mr. De Grazia and all of the participating opposition candidates were being used by Mr. Maduro.

But, Mr. Velásquez said, “there are dictatorships that use the tools of democracy to stay in power.”

“To behave normally in front of an electoral process that has been manipulated in every way, to me this is not right,” he said. “It’s complicity.”

Tags
Had Maduro Part Venezuela Who

These Influencers Found the Zillow Houses We Love to Hate

Palestinian Who Stabs Israeli in East Jerusalem Is Killed by Police

Check Also
Close
Featured Posts
‘It felt like a wedding,’ says a refugee Francis brought to Rome from Lesbos in 2016.
44 mins ago

Palestinian Who Stabs Israeli in East Jerusalem Is Killed by Police