Perhaps it was the way the lifeless bodies, bloodied by bullets, and some with hands bound, had been left strewn about or shoveled into makeshift mass graves. Or the reality of seeing them up close in widely circulated photographs and videos.

There have been other atrocities in the weeks since Russia invaded Ukraine, concentrating much of its firepower on the dwellings and gathering spots of ordinary Ukrainians, but the international outrage they provoked has been eclipsed by the reaction to revelations that retreating Russian soldiers left many slain civilians behind near the Ukrainian capital.

Some of the bodies found this past weekend outside Kyiv were face down, and some curled up. Civilians appear to have been killed on their bicycles, while walking down the street, or in the basements of homes. In Bucha, where many of the dead were discovered, three bodies were found in a garden.

Many of the victims had been shot in the head. A coroner in Bucha said his team had collected dozens. The Russians fired at anyone as their tanks rolled through the town in the war’s early days, some residents said.

Russian officials denied responsibility, dismissing the photographs of bodies as fabricated, but satellite images taken during the Russian occupation of Bucha and other towns belied their claims.

An analysis of the satellite images by The New York Times showed dots in the exact coordinates where the bodies were later found in the newly liberated areas by Ukrainian forces and journalists. That corroborated the accounts of witnesses who said many had lain there for weeks. 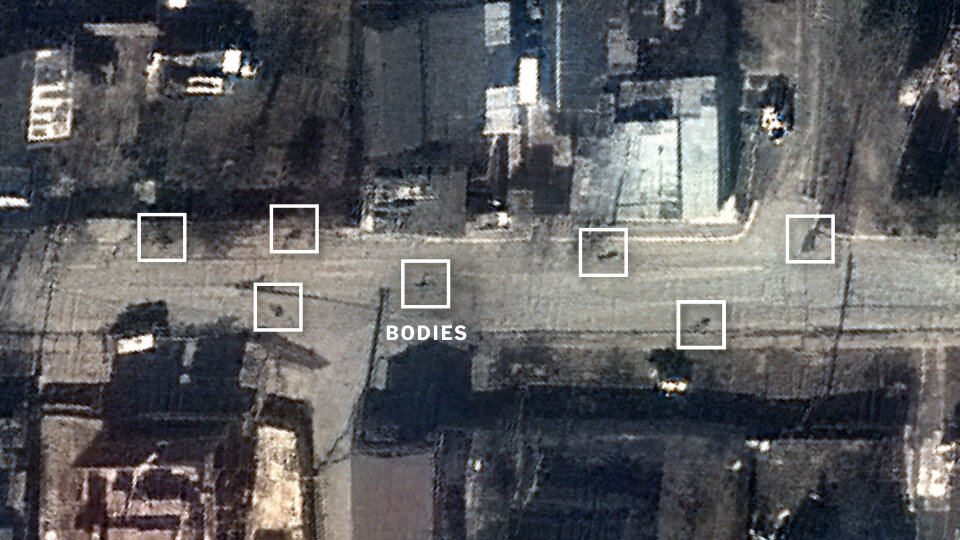 The summary killings of civilians addto the growing body of evidence of numerous flagrant violations by Russian forces of the laws of war, as described in the Geneva Conventions and the International Criminal Court’s definitions of what constitutes a war crime.

Prosecutors in war-crime cases have a steep hill to climb. But experts in international law say the distressing images of civilians shot to death in Bucha and other towns vacated by the Russians, along with the accounts of eyewitnesses, could provide a trove of documentation for investigations.

Unlike other horrors of the Ukraine war, like the bombing of a maternity hospital, the flattening of a theater where people were sheltering, or the shelling of apartment houses, the killings in Bucha could not be cast as unintentional damage or easily denied by the Russians as propaganda.

“What’s different here is that you have images of civilians with their hands bound and executed — that’s a completely different kind of crime,” said Alex Whiting, a visiting professor at Harvard Law School who has worked on international war crimes prosecutions. “This very much looks like a crime.”

Rachel Denber, deputy director of the Europe and Central Asia division of Human Rights Watch, which has been gathering evidence of war crimes in Ukraine, said the killings have generated so much shock in part because many of the other civilian deaths in the war have been caused by indiscriminate shelling and bombing — although that is no less an atrocity.

“I think one of the reasons people are having a different reaction to these bodies on the ground is the suspicion that these victims weren’t indiscriminate, they were deliberate,” she said.

When Russia began the invasion on Feb. 24, there were widespread expectations that its superior strength would quickly subjugate Ukraine. But when they met fierce Ukrainian resistance, the Russians soon resorted to large-scale bombings and missile barrages, making little or no distinction between civilian and military targets, and leveling all or parts of some cities and towns.

In some ways, legal experts said, the imagery of civilians shot at close range conveys a more personal malevolence.

“I suppose at one level, one sees a town destroyed, one thinks this sort of thing happens in war,” said Andrew Clapham, a professor of international law at the Geneva Graduate Institute, who is among those advising Ukraine’s government. “People sort of suspend their horror and say it might be explicable in wartime.”

But the deaths outside Kyiv, he said, showed an intent to kill civilians.

Here is a geographical breakdown of where some of the worst atrocities in the war in Ukraine have been reported:

A woman injured in a Russian missile strike on a maternity hospital in Mariupol last month later died, as did her baby.Credit…Evgeniy Maloletka/Associated Press

The southeast port, one of the first targets of the Russian invasion, has been under siege for weeks, with little food, water or power, and its onetime population of 450,000 has by some estimates shrunk to 100,000 or less. A March 9 missile strike by Russia severely damaged a maternity hospital, leaving an undetermined number of casualties. A March 16 Russian bombing destroyed the Mariupol Drama Theater, where hundreds of civilians had sought shelter and where the word “children” had been written in large letters outside to dissuade aerial attackers. Ukrainian officials said 300 people inside were killed. On March 21, Ukrainian officials said the Russians had moved up to 4,500 Mariupol residents into Russian territory — which, if confirmed as a forced relocation, would be a potential war crime.

The city of 1.5 million in eastern Ukraine, the country’s second largest, has been subjected to Russian aerial attacks from missiles, artillery and cluster munitions, widely banned weapons that spread bomblets over a wide area. According to residents and videos verified by The New York Times, the Kharkiv destruction has included elementary schools and residences. Ukrainian officials recently estimated that at least 500 people had been killed. And Human Rights Watch, in a report Sunday on potential war crimes in Ukraine, said it had documented at least one instance of rape by Russian soldiers in the Kharkiv region on March 13.

The northern city near the border with Belarus was a temporary haven for many civilians who sought to escape Russia’s early drive to encircle Kyiv. But Russian forces subjected Chernihiv to relentless aerial assaults as well, after Ukrainian defenders prevented the invaders from taking that city. Witnesses in Chernihiv said the Russian attacks destroyed schools, damaged hospitals and hit civilians waiting in bread lines.

Anna Smetana, a caretaker at an orphanage, said she was traveling with colleagues from Mykolaiv to a nearby town when Russian forces opened fire on their van.Credit…Tyler Hicks/The New York Times

The southern industrial city of 500,000, which blocks the Russian military’s pathway to the Black Sea port of Odesa, has withstood several Russian advances and aerial attacks. One destroyed a marine military barracks that killed dozens, others were more indiscriminate. Missile assaults have slammed into residential apartment buildings. And last week, a missile strike hit a government building, killing at least 36 people. Over the weekend and on Monday, other deadly attacks were reported on vehicles and homes in and around the city.

Residents of Bucha with the body of a civilian on Saturday.Credit…Daniel Berehulak for The New York Times

Many bodies of civilians have been found in suburbs north of Kyiv. President Volodymyr Zelensky of Ukraine said on Monday in his nightly address that more than 300 had been tortured and killed in Bucha alone, and that the list was likely to grow. In its report on Sunday, Human Rights Watch chronicled the summary execution of one Bucha man on March 4 by Russian soldiers and the killing of a mother and her 14-year-old daughter in another northern town, Vorzel, a few days later.

Sexual violence by the Russian occupiers has also been reported. Last month, Ukraine’s prosecutor-general, Iryna Venediktova, said in a Facebook post that a Russian soldier had killed an unarmed civilian and then repeatedly raped his wife in a Kyiv suburb.

Laura A. Dickinson, a professor at George Washington University Law School who specializes in international law, said the photographs of bodies in the Kyiv suburbs offered some of the most compelling signs that atrocities have been committed by the Russian side, regardless of the Kremlin’s denials.

“The evidence is quite damning, I would say,” she said. “It’s hard to dismiss as fake.”

Karim Benzema, the Surest of Sure Things, Lifts Real Madrid at Chelsea