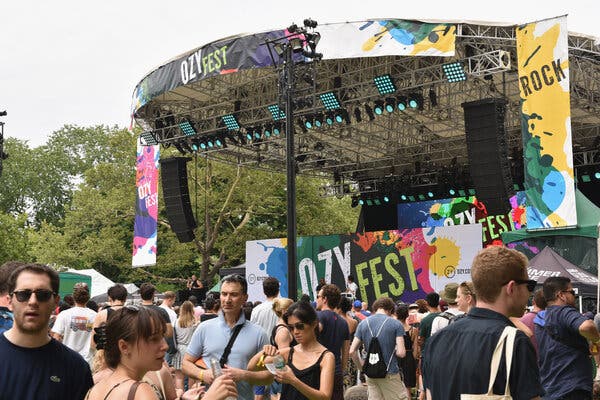 “As he spoke, however, the man’s voice began to sound strange to the Goldman Sachs team, as though it might have been digitally altered.” That is the eye-opening revelation in a new column by The Times’s Ben Smith about Ozy, a digital media company that has raised tens of millions of dollars from investors like Laurene Powell Jobs, Marc Lasry, Ron Conway, Axel Springer, LionTree, iHeart Media, the Ford Foundation and others.

When Ozy was closing in on a $40 million investment from Goldman Sachs, things got weird. On a conference call that Ozy arranged in February, members of Goldman’s asset management division were expecting to hear from a YouTube executive about the media outlet’s extensive reach on the site. After the strange audio on the call, the Goldman investors reached out to the YouTube executive. He said he wasn’t on the call.

Really weird: It turns out that Samir Rao, the co-founder and C.O.O. of Ozy, was impersonating the YouTube executive on the call, according to four people who were briefed on the meeting. Carlos Watson, the C.E.O. of Ozy, attributed the incident to a mental health crisis. Rao took time off work after the call and is now back at Ozy. (Watson and Rao both once worked for Goldman.)

Ozy, founded in 2013, has for years raised eyebrows over its claims about its audience size. “Trying to fool the world’s most famous bank, even by the hype-ridden standards of the media business, is way over the line,” Ben writes. Watson told Ben in an email that he understood the skepticism but that Ozy’s growth “has been completely real.”

The security team at Google determined a crime might have been committed and alerted the F.B.I. Goldman Sachs has since received an inquiry from federal law enforcement officials. Watson said that Ozy had not been contacted by investigators.

Investors were split in their reaction. Lasry, a hedge fund manager, said “the board was made aware of the incident, and we fully support the way it was handled.” Darren Walker, the president of the Ford Foundation, which backed Ozy with grants, said he had confidence in the company. A spokeswoman for Powell Jobs’s Emerson Collective distanced the company from Ozy, saying that it did not participate in Ozy’s latest investment round and has not served on its board since 2019.

In April, two months after Goldman Sachs walked away, Ozy raised another round of financing, Ben writes.

Read the full column about Ozy, Goldman and the conference call gone wrong.

Are President Biden’s spending plans doomed? A $3.5 billion spending package and $1 trillion infrastructure bill are in trouble after Democratic lawmakers whose votes are crucial in a narrowly divided Congress, including Senator Kyrsten Sinema and three House members from Texas, expressed opposition to tax increases. Speaker Nancy Pelosi delayed a vote on the $1 trillion bill to Thursday.

Britain struggles with fuel shortages and other supply disruptions. Panic buying led to long lines at gas stations over the weekend, with many saying that they are now out of fuel. An acute shortage of truck drivers is behind fuel and food shortages, leading Prime Minister Boris Johnson to issue thousands of special visas for foreign drivers and to suspend some competition rules.

Google takes on the E.U. in court. A five-day hearing starts today in which the tech giant is challenging a 2018 antitrust fine of more than $5 billion. The European Union said that Google had abused its power in the smartphone market; the penalty was the first in a number of rulings targeting U.S. tech giants in Europe.

Huawei’s long-running sanctions case is resolved. Meng Wanzhou, the Chinese company’s finance chief who had been detained in Canada since 2018, reached a deal with the U.S. Justice Department, allowing her to return to China in exchange for admitting wrongdoing in a fraud case that became symbolic of China and America’s fraying relationship. In return, two Canadians who had been imprisoned in China since Meng’s detention were freed.

Polestar, the Swedish high-end electric vehicle company, has signed a deal to go public at a $20 billion valuation, via a merger with a SPAC backed by the Gores Group and Guggenheim Capital. Polestar is owned by Volvo Cars and Volvo’s Chinese parent, Geely, with other investors including Leonardo DiCaprio. Polestar’s equity owners will roll over all of their interest in the deal and ultimately retain a 94 percent stake in the company.

Polestar has two models on the road, and it wants to launch three more by 2024. It delivered approximately 10,000 vehicles in 2020, but lags far behind the market leader, Tesla. “Compared to us, Tesla is a very old company,” said Thomas Ingenlath, Polestar’s C.E.O. Rather than spend capital building out electric-charging infrastructure, as Tesla did, Polestar can take advantage of existing infrastructure, he said. (In the U.S., that may still not be enough.)

Its valuation is conservative — for an electric car company. Lucid, which went public via SPAC in July, is valued at $41 billion. Rivian is expected to be valued at about $70 billion in its coming I.P.O. Tesla is worth nearly $770 billion. “Public markets are a little bit more challenging today, especially for SPACs,” said Mark Stone, the C.E.O. of Gores Group. The deal includes $250 million in financing, which the Gores Group chair, Alec Gores, said can be adjusted as needed, as in the case of redemptions by SPAC shareholders. (In premarket trading, the SPAC’s stock jumped above its I.P.O. price, a rarity among pre-merger SPACs these days.) The deal includes a six-month lockup period.

The deal comes amid heightened tensions between the U.S. and China. Polestar manufactures cars in China but “we are a European company,” Ingenlath said, noting that the company’s headquarters are in Sweden. The SPAC sponsors studied the “China issue” thoroughly, Gores said, adding that Polestar has manufacturing capabilities outside of China, like those it’s building in the U.S., that can be tapped as necessary.

“This is not like neurosurgery where you might want to pay a premium for someone to have years of experience.”

— Sabrina Corlette, a research professor at Georgetown who has studied coronavirus testing practices. Some start-ups charge as much as $380 per test (usually less than $20 at a drugstore). Insurers must pay certain labs whatever price they list online, which has led to court battles and calls for price caps.

► A debt deadline looms: Thursday is the deadline for the Senate to pass a bill that would avert a partial government shutdown the next day. And the government’s borrowing authority could run out as soon as next month. Republicans and Democrats have long sparred over the debt ceiling, but this time the odds are growing that the U.S. could default.

► Evergrande uncertainty: The property developer appeared to miss an $83 million interest payment last Thursday. Markets have steadied amid reassurances from China that it can contain a crisis, but the government’s plan to deal with the fallout for the economy has yet to take shape.

► Consumer confidence: Tomorrow, the Conference Board is set to report its consumer confidence index for September. The results for the previous month showed the index’s sharpest decline since February.

From the TimesMachine: Thousands of commuters in London’s financial district experienced a moving walkway for the first time on this day in 1960, when a passageway between two subway platforms received an upgrade. The Times reported that plans for a similar conveyor belt system in New York had been abandoned a few years before, dismissed as impractical.

China’s ability to blend top-down control of politics with market-based capitalism was for years seen as a source of strength. That balancing act, though, appears to be teetering. Economic growth is slowing and the country is facing a potential financial crisis in the collapse of Evergrande.

China’s reaction to its challenges is to exert greater control over its largest companies, making it clear who calls the shots in the world’s second-largest economy. This has significant implications for foreign investment, geopolitics and more, as a quick tour of some of Beijing’s recent crackdowns shows:

Cryptocurrency: On Friday, China bolstered its ban on all activity linked to digital currencies, which some saw as part of a broader effort to channel citizens away from private financial services providers, which include popular apps like AliPay and WeChat. The move could also be seen in the context of the Chinese central bank’s development of its own digital currency, which would allow it to track and control transactions.

Technology: China has been turning the screws on its largest tech companies, citing unfair competition. Officials recently limited online game playing to three hours a week for anyone under 18, denting companies like Tencent. Earlier this summer, Chinese officials stopped Didi from signing up new users days after China’s largest ride-sharing app listed its shares in the U.S. The government said it had to do with data privacy, but the timing cast a chill over Chinese companies listing abroad.

Electric vehicle manufacturers: China is putting the brakes on its homegrown electric vehicle industry, which has been fueled by government subsidies. This month, a minister declared that the country had “too many” EV companies.

For-profit education companies: In July, China banned tutoring companies from making profits and restricted foreign investment in the $100 billion sector. It is now estimated to be worth considerably less.

10 hours ago
Check Also
Close
Featured Posts
Amid Criticism, Elite Crime Teams Dwindled. Then Cities Brought Them Back.
21 mins ago

Education Issues Vault to Top of the G.O.P.’s Presidential Race
33 mins ago

Musharraf’s Legacy: A Conflicted Pakistan and a Bristling Military
45 mins ago