“There’s no going back to the before,” the actress Mackenzie Davis said, lifting her head and peering intently at an approaching Rollerblader. It was a bright early fall day in Manhattan, and Davis reclined comfortably on a peeling park bench outside the Tompkins Square dog run in the East Village.

“If you cut yourself, it’ll heal, but there’s a mark there,” she added. “I didn’t know that for so long.”

Jangling a leash in her other hand — she was watching her friend’s dog, a miniature husky — Davis fished a treat out of her coat pocket. She stretched a slender arm toward the dog and offered up the treat, which hesniffed and declined. Davis shrugged and settled back against the bench, folding her long legs comfortably.

“Everything accumulates,” she said. She could have been talking about her latest character, but at this moment she was addressing herself. “The idea of returning has always felt possible. Only in the last little while have I been like: Oh, no. Everything leaves a mark.” 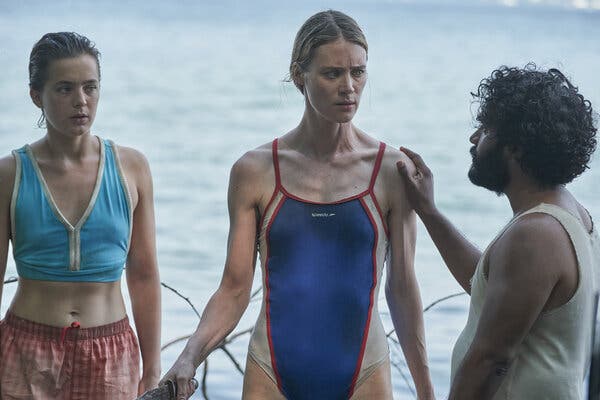 “Violence is a part of her world,” Davis (pictured with Philippine Velge and Andy McQueen) said of her character,  Kirsten. “But it’s not the banner of her reality.”Credit…Ian Watson/HBO Max

Davis, 34, is perhaps best known for her roles in the techno-dystopian Netflix series “Black Mirror” and as a mechanically enhanced super soldier in the 2019 “Terminator” movie, “Dark Fate.” But fans and critics have known her longer, owing particularly to her role as the programming virtuoso Cameron Howe on AMC’s “Halt and Catch Fire.”

Starting on Thursday, she will star as Kirsten Raymonde in “Station Eleven,” a 10-part limited series from HBO Max that has been adapted from the 2014 science fiction novel by Emily St. John Mandel. Given the book’s runaway success — it won the Arthur C. Clarke award and has sold more than 1.5 million copies — the adaptation seems likely to draw Davis further into the spotlight. So does the timing: The story revolves around a deadly pandemic and its aftermath.

But despite its sci-fi premise, “Station Eleven” isn’t styled as fantasy; it concerns itself more with investigating tragedy, personal trials and the marks they leave behind — an uncanny future artifact of our very real pandemic age. (The show, shot in Chicago and Toronto, began filming in January 2020.)

For Davis, playing Kirsten was an opportunity to demonstrate her emotional range. It was also a chance for her to grapple with her own intense feelings of loss and isolation.

“It’s been an unsettling few years,” Davis said, with a flat laugh.

She seemed very ready to press ahead.

We drained our coffees and decided to wander through the East Village in search of something to eat. Willowy and tall, Davis has shoulder-length blond hair and wide, clear eyes. That day she wore loose jeans and Doc Martens. She clicked her tongue at the dog and crossed onto East Seventh Street before cocking her head and considering a tiny taco shop: “Seems good?”

After her role in “Terminator: Dark Fate,” Davis was reluctant to play “the post-apocalyptic bad bitch” again. But it turned out Kirsten was powerful in a different way.Credit…Celeste Sloman for The New York Times

Davis feels at home in New York City, though she lived here only briefly. She grew up in Vancouver, went to college in Montreal and then moved to New York for two years to study at the Neighborhood Playhouse, an acting conservatory in Manhattan. After she scored her first major role in an indie film, Drake Doremus’s “Breathe In” (2014), she traveled out west to Los Angeles in search of an agent and eventually settled there. She landed her breakout role in “Halt and Catch Fire” a few months later.

“Halt,” lasting four seasons (2014-2017), was a steady part of Davis’s life for five years. Although the series never drew a big audience, it quietly gained a devoted following, aided in recent years by Netflix. Critics consistently praised it, placing the series on many major “Best Of” lists.

Mackenzie “can play intentions and emotions simultaneously that are usually diametrically opposed to each other,” Christopher Cantwell, a creator and showrunner of “Halt,” said in an email. “She can play incredible anxiety and overconfidence all at once.”

Davis’s career was gaining speed: Just after the third season of “Halt,” in 2016, she appeared in the “Black Mirror” episode “San Junipero” alongside Gugu Mbatha-Raw, an installment that won two Emmys. After “Halt,” Davis appeared in Denis Villeneuve’s “Blade Runner 2049” and then in Jason Reitman’s “Tully” (2018) alongside Charlize Theron. She still seemed lightly stunned when she recalled that period.

“Doing those two films back to back felt like —” she paused and shook her head slowly from side to side. “It felt like: This is the work I want to be doing. I was working at a level that I had only fantasized about.”

She considered her tacos, nestled close together in their paper box. “There’s no way to do this neatly,” she said, “so I’m just going to dive in.”

Her lead role in “Station” seemed like a natural next step, but 2020 put a halt to the momentum. Like most people, Davis faced her share of challenges. Her long-term relationship ended shortly before lockdown; production froze on “Station.” She entered quarantine alone — a “storm of isolation and loneliness,” as she described it. Eventually, she moved to London, in need of a fresh start.

Then in January 2021, she went to work on “Station Eleven,” where each day demanded a thinly veiled re-enactment of tragedies of the previous year. She found herself wading through a sea of “delayed” feelings.

One of Davis’s best-known roles to date was alongside Gugu Mbatha-Raw in the Emmy-winning “San Junipero” episode of “Black Mirror.” Credit…Laurie Sparham/Netflix

“Sometimes I’d be walking around, and I’d think about a line in my head and just … cry,” she said. She rolled her eyes.

“That is not at all the way I am as a person,” she continued. “I like to approach roles pretty rationally and logically, especially since you can’t count on an emotional response in my line of work.”

“But for some reason — I’m going to say it’s the pandemic! — that feeling didn’t expire,” she added.

In conversation, Davis is hyperfocused and sincere, jumping in with incisive questions or abstract ruminations. Cerebral without any coldness, she interrogates her own reactions almost as soon as she speaks them aloud.

“She challenges things in a really intelligent way,” Himesh Patel, who plays Jeevan, Kirsten’s caretaker after the pandemic hits, observed in a video call from his kitchen in London. “It’s coming from a place of wanting it to be the best it can be. She’s fiercely intelligent.”

The two actors began getting to know each other when Davis was a new arrival in London. On set in Toronto, they shared a cast tent, where Davis was constantly reading — Mario Vargas Llosa’s “The Bad Girl” one week and Michael Ondaatje’s “Divisadero” the next. Patel thought carefully when asked about his memories of that time.

“In a way, there was a feeling that we were carrying each other,” he said. “It was a weird time to be making something.”

Davis’s character required her to navigate a multitude of identities: Kirsten is a member of the Traveling Symphony, an itinerant group of musicians and actors traversing the postpandemic landscape. Equally comfortable onstage (she’s the troupe’s Hamlet) or wielding a knife, Kirsten is at once a fiercely protective mother figure and a damaged young woman. She was 8 years old (played in an earlier timeline by Matilda Lawler) when the deadly flu hit, and “Station Eleven” spends much of its time digging into her memories, tying her actions in the present to the horrors of those early days. Davis’s eyes, limpid and expressive, flash from wariness to sorrow, then back.

When Patrick Somerville, the series’s showrunner, and Hiro Murai, who directed Episodes 1 and 3, first approached Davis about playing Kirsten, she wasn’t sold. She had just wrapped her role in “Terminator,” and Kirsten seemed too similar. “I felt like I’d done that version of a strong female character — the postapocalyptic bad bitch,” Davis recalled.

But after talking with Somerville and Murai, she was persuaded. Kirsten seemed powerful in a different way. “Violence is a part of her world,” Davis explained, “but it’s not the banner of her reality.”

“I like to approach roles pretty rationally and logically,” Davis said, “especially since you can’t count on an emotional response in my line of work.”Credit…Celeste Sloman for The New York Times

Instead, her strength lies in her emotional depth: She loves profoundly, and she has an intuitive sense for people’s feelings and intentions. The qualities that make Kirsten a good Shakespearean actor also help her survive a postpandemic landscape.

In one of Davis’s strongest scenes, Hamlet, as played by Kirsten, grieves his father’s death, standing on a makeshift stage surrounded by flickering candles. Staring into the darkness, Kirsten’s mind shifts to her childhood, when she learned that her parents were dead. Davis’s face holds both moments in her character’s life at once, past and present.

“There’s an impossible ocean of subtext” in those scenes, Somerville told me on a video call. “After the fact, I was constantly realizing that Mackenzie had played three looks in a row, invisibly. She was meticulously making bridges between moments, already doing the thing I hoped to build with the show’s nonlinear flashbacks.”

The day after tacos, we met at a bustling all-day cafe in the West Village. Davis listened as our nervous server described the day’s specials, then thanked her warmly.

When I asked Davis about her acting in those layered moments Somerville described, she leaned forward.

“Like anybody else, I had a number of hugely upsetting events happen in the last two years,” she said. “There was all of this ambiguous trauma that didn’t really have a home because everybody was feeling everything — and where do you put trauma that is persistent and doesn’t begin or end but is just part of, like, a great, general sense of loss?”

A little out of breath, she gave a crooked half-smile, as if amused by her own fervor, and sat back in her chair.

“Then, suddenly,” she said, “I was telling a story within a house that could hold all of those feelings.”

Tags
Davis Li̇ke Play She That

Review: In ‘Flying Over Sunset,’ Getting High With the Stars

4 Operas in 48 Hours: A Critic’s Marathon at the Met

From Northern Ireland, Dance as a ‘Physical Prayer’

The Endless Pop Shimmers of the Weeknd