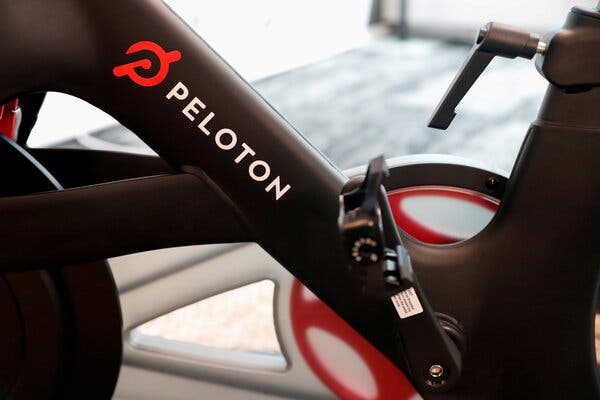 As the economy reopens and markets look forward to life without pandemic restrictions, many “stay at home” stocks are no longer paying off for investors.

Peloton, the maker of connected exercise bikes, said yesterday that it would raise $1 billion in cash from selling stock, just weeks after it said it didn’t need more capital. The company’s stock is down more than 60 percent this year. Disappointing sales and profits as lockdowns ease have also hit pandemic-market darlings like Zoom, which is down nearly 25 percent this year. Meanwhile, the shares of companies like the gym operator Planet Fitness and the concert organizer Live Nation have risen steadily in recent months.

The market shift reflects a broader reshuffling of the economy, as Americans return to gyms, concerts and other in-person activities, The Times’s Matt Phillips reports. “The markets clearly sense the pandemic is over,” said Ben Emons of Medley Global Advisors. And that shift is also revealing how over-exuberant investors were in evaluating the long-term prospects for stay-at-home stocks, even as some of life’s routines may have changed for the foreseeable future.

Part of the slump can be linked to unrealistic expectations. Zoom’s market value, for instance, rose to some $160 billion at its pandemic peak, implying that investors believed the company’s bottom line would continue to expand. Instead, with growing competition from Microsoft, Google and others, Zoom’s growth is stalling. Profit is expected to be up just 3 percent next year.

Some companies are struggling with the transition to a more open economy. Revenue at Peloton has rocketed, but expenses have risen faster. The result: The company, which became profitable for the first time during the pandemic, lost $376 million in its most recent quarter. Peloton’s C.E.O., John Foley, last week told employees in an email that the company had been “undisciplined” in trying to meet customer demand, rushing to hire and increase manufacturing, and promised to go “back to basics,” according to Insider.

Investors are now piling into “reopen stocks.” Shares of Live Nation, for instance, are 50 percent higher than at any time before the pandemic, although sales remain less than half what they were in 2019. (The company also faces lawsuits connected to the deadly Astroworld festival, which it promoted.) And Wall Street thinks the stock is headed even higher: Goldman Sachs recently lifted its price target on Live Nation to more than 10 percent above its current level. In a report about the outlook for stocks next year — it predicts a 9 percent gain in the S&P 500 — part of Goldman’s thesis is that “declining virus and inflation headwinds” would bolster sales and margins at “businesses most exposed to these challenges.”

Pfizer applies for U.S. approval of its Covid pill. The drugmaker wants Paxlovid to be used to treat at-risk unvaccinated people; it could become available within weeks, and the U.S. has already agreed to buy enough to treat 10 million people. In other coronavirus news, Washington, D.C., eased its mask mandates, while New York City will allow only vaccinated people to celebrate in Times Square on New Year’s Eve.

Janet Yellen warns that the debt limit will be breached within weeks. The Treasury secretary told Congress that the U.S. won’t be able to pay its bills after Dec. 15 unless lawmakers raise or suspend the limit. While Republicans have insisted Democrats approve such a move along party lines, Yellen called for it to be done on a bipartisan basis.

Activision Blizzard employees call on their C.E.O. to resign. About 100 workers protested outside one of the video game maker’s studios, after The Wall Street Journal reported yesterday that its chief executive, Bobby Kotick, had known of sexual harassment and assault claims within the company and hadn’t acted. It was the second such protest since July, after a California agency accused Activision of harboring pervasive harassment against women.

Netflix publishes a weekly Top 10. The streaming giant has started to post data on its most popular programming. (Currently leading: the original movie “Red Notice.”) The move may force the rest of the often opaque streaming industry to disclose more audience information.

Miramax sues Quentin Tarantino over his NFT plans. The production company said Tarantino’s plans to auction “Pulp Fiction” script pages as nonfungible tokens violated copyright and contract terms. In other crypto news, prices for NFTs tied to celebrities are plunging, and the Staples Center in Los Angeles will be renamed Crypto.com Arena.

Good news on retail sales, with warnings ahead

Retail sales rose for the third straight month in October, the government said yesterday, the same day that Walmart and Home Depot both reported strong quarterly earnings. This highlighted the resilience of the U.S. economy despite pandemic disruptions. But the heavy spending — focused on goods over services — is also contributing to the economy’s problems.

The spending surge has made supply-chain snarls and inflation worse. “It’s the demand in the first place that’s causing prices to move higher,” said Aneta Markowska, the chief financial economist for Jefferies. Forecasters predict that this holiday season will look a lot less like the pandemic-constrained 2020 than like 2019, when the economy was humming. This year, consumers, in aggregate, have trillions of dollars more in savings than before the crisis.

Shoppers aren’t necessarily in a good mood, even as they readily open their wallets. A recent survey by the University of Michigan, measuring consumer optimism about the economy, showed the lowest level in a decade, with inflation and supply issues weighing on their confidence. And Target’s shares are down in premarket trading today, even after it beat analyst expectations with its latest earnings, as the retailer warned that supply chain woes and rising labor costs were putting pressure on its profit margins.

“I’m here to tell our customers that, despite what they might have read or heard, Christmas is not canceled.”

— Ty Warner, the billionaire head of the toymaker Ty Inc., who is chartering cargo planes to import Beanie Babies directly from China.

The Ned NoMad is the latest step in an expansion plan by Soho House’s parent company.Credit…Membership Collective Group

Soho House, the exclusive chain of private members’ clubs, has been in New York for nearly two decades. But DealBook has gotten the first look at the Manhattan outpost of The Ned, its combination of hotel and members’ club, as its newly public parent company, Membership Collective Group, seeks to make good on its expansion plans. Is now the right time?

Moving into Midtown. Set to open next summer in the former NoMad hotel, it will be the second location of The Ned, a complex with a hotel, restaurant and club; the first is in London’s financial district. The Ned caters to “professional like-minded people,” as Nick Jones, the founder and C.E.O. of Membership Collective Group, put it in an interview. Or, reading between the lines, the kind of banker and consultant types who necessarily don’t fit into Soho House’s more creative-leaning member rolls. (The Ned is expected to open another location in the American Stock Exchange Building in Lower Manhattan in 2023.)

It’s part of the company’s bet on rapid expansion and the waning of the pandemic. Membership Collective Group went public this summer with the promise that a business built on exclusivity could scale: “It’s about members, adding members and adding houses,” Jones said. The company said that it plans to open five to seven new sites a year around the world, including Neds in New York, a Scorpios resort in Tulum, Mexico, and a (relatively) lower-end Line hotel in San Francisco.

But Wall Street is yet to be convinced. The company’s shares have traded below their $14 I.P.O. price for most of their life on the public markets. Its latest financial results, issued this morning, offer a mixed picture: The company lost $76 million in the third quarter, more than the same period last year (in part because of I.P.O.-related costs). There were also bright spots, as revenue grew 57 percent,94percent of members continued to pay their $4,000 annual fees and its coworking business saw a 44 percent rise in customers. In cities where pandemic restrictions are lifting, like London, business is good. “People are very keen to get back to their old ways of living,” Jones said. And investors are keen for the money-losing company to break new ground.

Investors Hung Their Hats on Peloton and Zoom Last Year. What Now?

Public Displays of Resignation: Saying ‘I Quit’ Loud and Proud

The window to lift the debt limit is narrowing, an influential think tank warns.

‘It felt like a wedding,’ says a refugee Francis brought to Rome from Lesbos in 2016.
1 hour ago