LOS ANGELES — It was a packed house, a big moment and the baseball was rising toward the sky on a line straight toward October.

Albert Pujols watched in a uniform he never expected to wear from a place he never imagined he would be. It was teammate Corey Seager’s two-run blast that lit the roar that capped a Los Angeles evening last week. And there was Pujols, in the Dodgers dugout, leading the cheers.

Once, in the days he was known as The Machine, Pujols commanded his own stretch-run spotlight. Those big moments now mostly belong to others, while Pujols focuses on what is usually one nightly plate appearance, strategically placed, against a left-handed reliever — though with Max Muncy injured, that could change in Wednesday’s National League wild-card game against the St. Louis Dodgers at Dodger Stadium.

The Dodgers signed Pujols in May, four days after his unceremonious release by the Los Angeles Angels and in the final season of a 10-year, $240 million contract. In his very specific role, he has flourished beyond expectations, scorching lefties for a .306 batting average and finishing the season with 12 homers and 38 R.B.I. for the Dodgers.

His teammates rave about his joie de vivre. And now a man who once dominated Octobers for St. Louis is back in the postseason for the first time since 2014 — and his first test will come against his beloved Cardinals. His frustrating end with the Angels is fading from the narrative.

“Whatever happened with the Angels is what happened with the Angels,” the longtime Dodgers ace Clayton Kershaw said. “But as soon as he got here, he embraced his role, which has been so huge for us. I think we needed that. We needed that older veteran. He calls himself Tio, we call him Tio, that uncle-type helping everybody out with hitting but also being a guy who is happy for you when you do well, smiling in the dugout.” 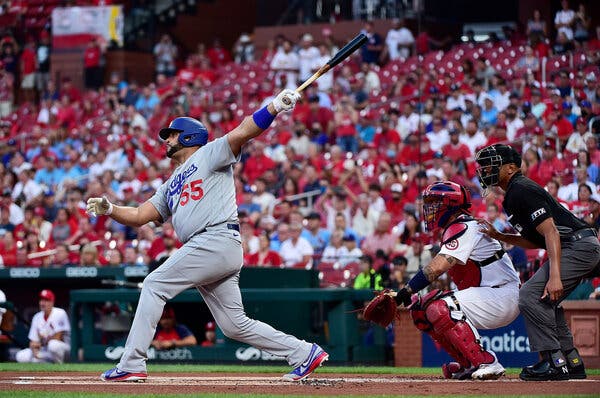 Among Albert Pujols’s 12 home runs for the Dodgers this season was a solo shot against the St. Louis Cardinals on Sept. 7.Credit…Jeff Curry/Getty Images

Watch him during a game — the smiling, the laughing, the cheering, the occasional late-innings laser — and he appears to have found the perfect spot for himself.

Unquestionably near the end of career that has seen him collect 3,301 hits, 679 home runs and two World Series rings, Pujols, 41, sat in the Dodgers’ dugout some 16 hours after Seager’s blast and pondered his unexpected return to October baseball.

“Hey, listen, these guys were going to have a great year whether I was here or not,” Pujols said of his Dodgers teammates. “They’re just a really good, talented ball club with great managing, a great coaching staff, great preparation and great hitting coaches.

“I’m just blessed to have this opportunity.”

In his first 11 seasons — all with St. Louis — Pujols made the playoffs seven times, and went to the World Series in three of those years. Since 2011, he has been back only once. He spent most of those Octobers with his wife, Deidre, and their five school-age children at home in Orange County, Calif. He rarely watches TV, he said, and that includes the playoffs and World Series if he is not participating.

“I might catch an inning or two here or there but I feel the off-season is a time to refresh and train your mind for things you want to accomplish for the next year,” he said. “To tell you the truth, I watch more Caribbean baseball than the World Series — the winter league, stuff like that.”

Pujols has provided a few big moments in his time with Los Angeles, but he has also served as a mentor and cheerleader for the team’s younger players.Credit…Gary A. Vasquez/USA Today Sports, via Reuters

Recent Octobers, he said, have been spent with his children in the pool, riding bikes, going to the beach. The kids lobby for trips to their favorite restaurants and Deidre cooks a lot at home.

But this week, Pujols will trade all of that for one more fall in front of packed stadiums.

“You can tell he appreciates being on this team; he really enjoys the success of everybody, being the super elder-statesman,” another Dodgers ace, Max Scherzer, said, chuckling.

To put Pujols’s age — 41 — in context, four of this year’s 10 postseason managers have taken up spots on the field opposite him in previous Octobers as players: the Dodgers’ Dave Roberts and San Francisco’s Gabe Kapler were teammates on the Boston Red Sox team that swept Pujols and the Cardinals in the 2004 World Series. Boston’s Alex Cora was with the Dodgers during a 2004 division series between Los Angeles and St. Louis. Milwaukee’s Craig Counsell faced Pujols’s teams twice, in a 2001 division series when Counsell was with Arizona and in the 2011 National League Championship Series when he was with the Brewers.

Two other key postseason figures also have extensive October experience with Pujols: Tony La Russa, now with the Chicago White Sox, managed Pujols in the player’s 11 seasons with St. Louis. And the Atlanta third-base coach Ron Washington was managing Texas during one of Pujols’s signature career moments: his three-homer Game 3 in the 2011 World Series that helped St. Louis to a thrilling seven-game title.

“Was anyone surprised? Nooooo,” Washington said. “That was Albert Pujols. You make bad pitches to Albert Pujols back then, you got hurt.”

Pujols, who remains popular in St. Louis, spent his first 11 seasons with the Cardinals. His teams there made the postseason seven times and won two World Series titles.Credit…Dilip Vishwanat/Getty Images

The Dodgers signed Pujols when Seager was sidelined with a broken hand and outfielder Cody Bellinger was out with a hairline leg fracture. They envisioned him starting some at first base against lefties, knowing he would eventually be reduced to a veteran bat off the bench. The acquisition of Trea Turner and Scherzer from Washington at the trade deadline in July, along with the return to health of Seager and others, has indeed cut into his playing time — but has made him no less valuable.

“He sees a lot of things people don’t see,” said Skip Schumaker, a bench coach for the San Diego Padres and a teammate of Pujols’s in St. Louis from 2005 to 2011. Schumaker called Pujols the smartest player he has ever known.

“He helped me like you wouldn’t believe playing right next to me, telling me what to look for and, by the way, giving me the confidence that I could play next to him on a championship team,” Schumaker said. “That goes so far.”

The Dodgers rookie Gavin Lux has picked up on Pujols’s attention to detail, how even in the batting cage “every little thing matters, it seems like he’s got everything figured out and I still see him talking to hitting coaches.”

During their run of eight consecutive N.L. West titles, the Dodgers have incorporated a highly successful mentorship program, bringing in Chase Utley and David Freese at the end of their careers before Pujols.

“Those three are all very different guys,” Kershaw said. “They’re guys I have more respect for than most I’ve played with. Freeser was just a born leader and guys followed him. Chase was the same way but in a quieter way. People wanted to see what he was going to do before they did something.

Pujols may not be the player he once was, but there is an intimidation factor to being a future Hall of Famer with 679 home runs.Credit…Gary A. Vasquez/USA Today Sports, via Reuters

“Albert is a little more charismatic, a little more joyful. He’s happy, smiling, enjoying his time. It’s almost like it’s rejuvenated him in a sense, getting to be on a really good team, getting to go to playoff baseball again.”

Pujols said that he vividly remembers his own mentors when he burst into the majors as a rookie in 2001. Mark McGwire, Jim Edmonds, “and my Latin guys — Placido Polanco, Edgar Renteria, Fernando Vina.” Then various others whom the Cardinals added via trade: The Hall of Famer Larry Walker. Reggie Sanders. Woody Williams.

“I think it would really be selfish if I can’t pass the wisdom they gave me to these young players,” Pujols said. “That’s something that I embrace and enjoy. It’s given me a new boost in my life. That’s what I’m telling them.

“The last four months here, I’m having more fun than I’ve had in awhile.”

He’s lived through and witnessed enough transition in the game that when his time came, he surprised some by easily slipping into a new uniform and a new role.

“Listen, it’s not rocket science,” Pujols said. “You’ve seen guys with this kind of role toward the end of their career. I know I’m not the player I once was. I think everybody knows that. But I think I can still contribute. That’s why I’m still wearing this uniform. Any time I have the opportunity, whether it’s in the field or in the dugout, I going to give my best to help this organization.”

To the Dodgers, those contributions have proved vital. On a Sunday afternoon in August, as the Dodgers faced off against the Angels, Roberts hastily summoned Pujols to pinch-hit for Justin Turner in the second inning after Turner strained his groin. Pujols responded with a two-run homer and played first base the rest of the way. It remains one of Roberts’s favorite moments from this season.

“It’s not normal,” said Max Scherzer, who said he rooted for Pujols when he was in high school. “It’s not normal that I’m playing with Albert Pujols.”Credit…Gary A. Vasquez/USA Today Sports, via Reuters

“There’s no entitlement with him,” Roberts said. “And if there’s anybody who could feel entitled, it’s a first-ballot Hall of Famer. But he’s just one of the guys.”

Even if he is not the player he once was, Pujols still brings a certain intimidation factor to the game that is hard to replicate.

“You pop that lefty, you know he’s going to come out of that dugout,” Braves Manager Brian Snitker said of anticipated late-innings matchups. “You’re damn sure of where he’s at.”

How old is Pujols, besides 41? Scherzer is a St. Louis native who rooted for Pujols during high school before graduating in 2003. He was drafted out of the University of Missouri in 2006, the year the Cardinals beat Detroit in the World Series. While both men are expected to be inducted in the Hall of Fame one day, Scherzer, 37, remains giddy about sharing a clubhouse with Pujols, his one-time hero.

Indeed, when the Dodgers were in St. Louis last month, Scherzer took a moment to corral Pujols for a photo.

“I don’t care what you say,” Scherzer said he told Pujols. “I’ve got to get a picture with you in front of the Arch.”

Now, as Pujols steps into the postseason for the first time in seven years, he has every chance to make it more than just another photo op. Next up is one more chapter against, who else, the Cardinals.

Facebook’s Apps Went Down. The World Saw How Much It Runs on Them.

Fears of a ‘Bottleneck Recession’: How Shortages Are Hurting Germany

A Too-Early Look at the Super Bowl Matchup