The sports world is entering another period of uncertainty, with a surge in coronavirus cases, more game postponements and questions about the Beijing Olympics.

But 2021 was also a great year in sports. There were challenges and disruptions, but there were also plenty of memorable moments. Take a minute or two and scroll through this highlight reel of some of our favorite plays from the past year.

Most of the time, a ground ball to the third baseman with two outs ends an inning. Back to the dugout. On May 27, Jávier Baez of the Chicago Cubs hit a ball just like that — but somehow, thanks to his daredevil baserunning and the Pittsburgh Pirates’ many blunders, he ended up at second base instead and allowed a teammate to score. It was the nuttiest play in Major League Baseball in 2021, if not of one of the wildest in baseball history.

Kevin Durant catches a lob off the glass.

This play, during the Nets’ 2020-21 regular-season finale against Cleveland on May 16, was a beautifully executed fast break. It started with Blake Griffin recovering a batted ball and twirling a one-handed, behind-the-back pass to Kyrie Irving at midcourt. Irving touch-passed the ball to Mike James, who had an open lane to the hoop. But instead of taking the layup, he threw a pass off the backboard for Kevin Durant to dunk home. It was a blend of excellent passing and showmanship, elements often on display when basketball is at its best.

Eugénie Le Sommer leaves a defender in her wake.

Eugénie Le Sommer is France’s career scoring leader and showed off her skill in a National Women’s Soccer League game on July 31. With precise footwork, she made her way into the penalty area, dropped Racing Louisville F.C. defender Emily Simon to the grass with two quick cutbacks and curled a shot into the far corner for her team, OL Reign.

Trevor Zegras blends lacrosse and basketball on the ice.

One of hockey’s rarities is the lacrosse goal, when a player standing behind the opponent’s net bends low to the ice and uses the blade of the stick to scoop the puck, cradle it and tuck it past the unsuspecting goaltender. It’s also known as the Michigan, as in the university, because Mike Legg executed the maneuver in a 1996 N.C.A.A. tournament game against Minnesota during the Wolverines’ championship run.

Trevor Zegras, a rookie forward for the Anaheim Ducks, put his own twist on it this month against the Buffalo Sabres. Instead of going for the goal, he lofted a pass to Sonny Milano, who batted the puck past goalie Ukko-Pekka Luukkonen in hockey’s version of the alley-oop.

One of the most anticipated events of the Tokyo Olympics was the women’s 400-meter hurdles. Frequently, when Sydney McLaughlin and Dalilah Muhammad, both of the United States, meet on the track, the winning time sets a world record. The trend continued this summer, when both McLaughlin and Muhammad broke the world record — which had belonged to McLaughlin — in the final of the event. McLaughlin won the race in 51.46 seconds, beating Muhammad by 12-hundredths of a second.

“I always say that the perfect race doesn’t exist, but this is the closest I’ve come to a perfect race,” Karsten Warholm of Norway said after the final of the men’s 400-meter hurdles in Tokyo. Warholm shattered his world record, winning in 45.94 seconds, to beat Rai Benjamin of the United States, who also broke the world record but was left with a silver medal. Five runners behind them set national records.

Diego Schwartzman, one of the quickest men in tennis, made the tweener look passé in Paris last month with this superbly disguised, no-look lob winner past Marcos Giron of the United States.

Tampa Bay defenders swarmed him, and Patrick Mahomes fled. This happened all throughout the Super Bowl, and on a fourth-and-9 early in the fourth quarter, it was happening again. But still, he persisted, contorted, concocted. It was the best throw of the game, of the N.F.L. playoffs, of darn near the last calendar year — and it fell incomplete. But it sure wasn’t Mahomes’s fault.

This moment of brilliance on Oct. 27 started inauspiciously. Portland’s Santiago Moreno sent a leading pass ahead of his teammate Dairon Asprilla but Asprilla couldn’t run down the ball. It bounded, seemingly harmlessly, off the turf at the Timbers’ Providence Park and headed for the hands of San Jose goalkeeper J.T. Marcinkowski. But instead of collecting the ball, Marcinkowski mishandled it. That allowed Asprilla to gain control, pop the ball into the air with his back to goal and score an acrobatic shot from outside the penalty area.

No doubt, her waterfall of tears and shared joy after winning helped make this an Olympic moment. But let’s pause and appreciate Tamyra Mensah-Stock’s athleticism in becoming the first Black woman to win gold in wrestling. The top seed in the 68-kilogram freestyle final, she defeated the second seed, Blessing Oborududu of Nigeria, 4-1, after two takedowns in the first period. (Oborududu became the first Nigerian to win a medal in wrestling.) Mensah-Stock’s performance, strength and strategy, all in powerful harmony, were in keeping with her dominating march in the sport that only seems likely to continue.

The most magnificent goal scored during the 2021-22 N.H.L. season has already happened. On Nov. 5, late in the third period of a tie game against the Rangers, Connor McDavid, the center and human highlight reel for the Edmonton Oilers, collected a rebound off the boards, dipsy-doodled at the top of the zone for a bit, then stick-handled his way down the middle through four Rangers players as if they weren’t even on the ice before slipping the puck past goalie Alexandar Georgiev. It seemed to unfold in slow motion, and demanded repeated viewings, each one revealing a nuanced bit of innate hockey genius. Coming off a season for the ages, McDavid keeps outdoing himself. Oilers forward Zach Hyman called it the best goal he had ever seen. Us too.

Bobby Finke comes out of nowhere.

Robert Finke’s uncanny ability to find a second gear in the pool resulted in two surprise gold medals at the Tokyo Olympics. Finke, a first-time Olympian, won the men’s 800-meter freestyle with a stunning comeback in the last 50 meters. (Watch him in Lane 3 at the four-minute mark in the video.) Then he won the 1,500 free with another surge on his final turn. The performances left everyone — his opponents, his coaches, even Finke himself — stunned. “I didn’t know I had these swims in me,” he said.

Bruno Fernandes is no dummy.

I like speed and power as much as the next sports reporter, but I really like smarts, style, poise and any evidence that a player is operating on some higher cognitive plane. In April, Bruno Fernandes showed all of that without touching the ball, instead allowing it to pass through his legs — a bit of misdirection called a dummy in soccer terms — and thus free an onrushing teammate to score a relatively simple goal. I especially liked how, as Manchester United was celebrating, Mason Greenwood looked at Fernandes and tapped his head three times in appreciation.

Novak Djokovic won this epic U.S. Open semifinal, but Alexander Zverev won the rally of the year: going for it and converting on the 53rd shot.

Noteworthy moments in distance running exist only in retrospect. When the decision is made to set out at a world-record pace, or to break away from the pack, or to alternate surging with jogging to break an opponent, success is measured many minutes and miles later.

Eugene, Ore., was so blistering hot in late June that the organizers of the U.S. Olympic track and field trials moved the women’s 10,000-meter race to the morning, when it would be “only” 85 degrees, and humid. No matter to Emily Sisson, who decided about six minutes into the race to move to the front and break the field by slowly ramping up her pace. She did so handily, winning by an unheard-of 1 minute 13 seconds. Sisson set an American record in a race that was so brutal that four competitors did not even finish and the third-place finisher had to be hospitalized and did not remember the final few laps.

Kai Jones skis out of bounds. 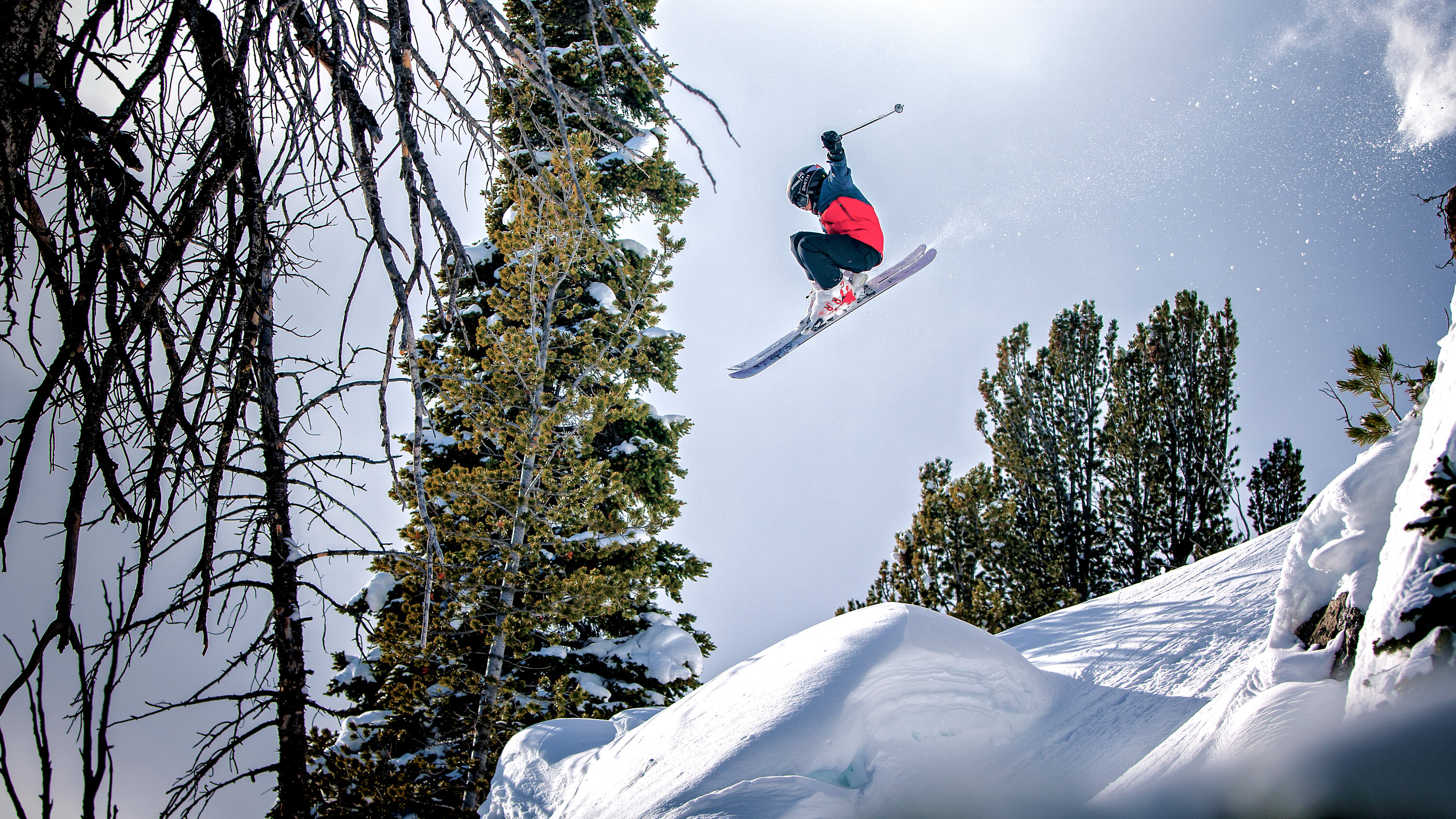 This video, which accompanied my article in January about Kai Jones, a 14-year-old daredevil pro adventure skier, was easily the most jaw-dropping sports performance I saw this year (or last). Jones’s verve, athleticism and fortitude amount to visual proof of the youth movement that is rewriting the limits of what used to be called out-of-bounds skiing. Don’t be surprised if you sometimes have the urge to cover your eyes as you watch.

Trick plays are amazing when they work. They are disastrous when they don’t. This one didn’t work.

Trailing by 5 points inside the final two minutes of the game, Virginia needed a touchdown to take the lead against its in-state rival Virginia Tech in their showdown last month. On third-and-7, the Cavaliers went for a deep cut in the playbook, a backward pass to a lineman that ostensibly should have shocked the defense. The Hokies made the tackle for a loss, got a fourth-down stop, beat Virginia for the 17th time in their last 18 matchups and gained bowl eligibility.

The most memorable highlight isn’t always a good one. Anastasiia Galashina of Russia was one of the final two competitors in air rifle at the Tokyo Olympics. After a long run of scoring 10.8s and 10.7s — 10.9 is the maximum — she had the lead with one shot remaining. That shot (at 1 minute 45 seconds in the video) was nowhere near the center of the target: a terrible 8.9, her worst shot of the competition. She fell from first to second in an instant, with Yang Qian of China winning the gold.

Tags
Goal Pass Play That This

Fox tightens its vaccine mandate and will no longer allow testing instead.

Crack Down Hard, or Wait and See? Europe Splits on Omicron Response.

At Least 6 Killed in Crush at African Cup Match

The Prophet of the Deal

There Is Plenty to Learn From an Election, Even if No One Wins

Check Also
Close
Featured Posts
War May Loom, but Are There Offramps?
4 hours ago

M.L.B. and Its Players Union Show Some Movement in Lockout
5 hours ago