AUGUSTA, Ga. — The roars were absent or diminished for two Masters Tournaments, so many spectators kept away because of the pandemic.

But Augusta National Golf Club’s gates have swung open once again for the wealthy masses to convene along the course. For all that has changed just about everywhere else, not so much has at Augusta. Of course it hasn’t: This is tradition-bound Augusta, for better or for worse.

And so the Masters is, as ever, a sporting event with the (sometimes vanishing) sensibilities of a garden party, the rarefied attendance of an elite fraternity gathering and a golf spectacle equaled by few places.

Pairing sheets, free to anyone who perhaps paid thousands of dollars for a general admission pass, rustle. Ice cubes clink in plastic cups, and sandwich wrappers crinkle. Balls catapult off driver heads, setting up shots and, in the meantime, anodyne commentaries to no one in particular. There are nervous laughs, urgent shouts and communal ducking and shoulder-clenching when a shot goes astray and lands on the crossway of an entirely different hole.

There are no cellphones, no remote doorbell chimes, no one squawking on a conference call that you, too, have wound up joining. But there is, at last, noise.

“They just live and die with your success or failure,” Tommy Aaron, the 1973 Masters winner, said of the spectators in 2020.

And they and their exclamations are back. A cheer someplace prompts heads to snap around, the volume and direction suggesting what might have made one man’s day and ruined another’s.

The roars have been building all week. Headed into the final day, surely the safest bet at Augusta is that Sunday will elicit the greatest ones of all. 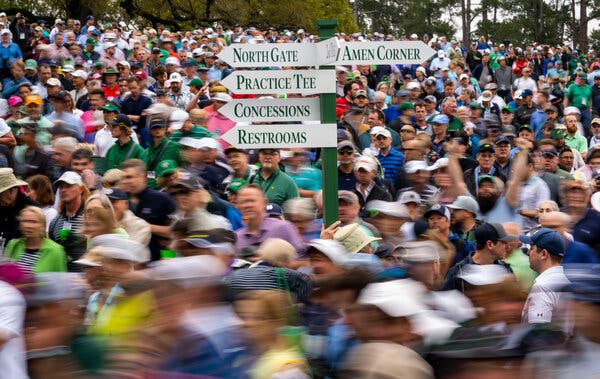 Spectators leaving the golf course after the horns sounded to alert that lightning was in the area and play had been suspended during practice rounds on Wednesday.

Cellphones are not allowed on the course, but the Masters provides free phones for patrons away from the action.
Patrons posed outside the clubhouse dining area.
The concession area during a practice round. While some prices have gone up slightly this year, it is stilll pretty cheap to eat and drink at Augusta National.
Fans following a shot hit on the the 13th fairway in the second round.
A young boy watching the golfers on the practice green.
The crowd watching Bryson DeChambeau hitting from the tee on the third hole during the first round.

As Tiger Woods Falls Behind at the Masters, the Spotlight Shifts

Snowmobiles in Slush: Sports Are on Thin Ice in the Warming Arctic

Tiger Woods: My Leg Feels OK, as Long as I Don’t Play Golf
3 hours ago

With a ‘Special Group,’ the Mets Find Ways to Win
3 hours ago

‘Racism’ Has Too Many Definitions. We Need Another Term.
3 hours ago