UVALDE, Texas — As word of the staggering death toll spread through Uvalde on Tuesday, the parishioners of Sacred Heart Catholic Church rushed, almost reflexively, to be together. Within an hour, they had filled the sanctuary for an impromptu Mass.

The next evening, the congregation gathered to worship again. Children from the parish laid red roses before the altar, one for each of the 19 students and two teachers who had been killed in the attack on the elementary school just a mile away. And at a Mass the following night, another rose was added: Joe Garcia, the husband of one of the teachers, had collapsed that morning from a heart attack — an early ripple of the collateral devastation that would be stirred by the massacre.

“We’re a family,” Archbishop Gustavo García-Siller of San Antonio said in a gentle voice, trying to reassure Joe and Irma Garcia’s children — and, by extension, the congregants who had been drawn to Sacred Heart that evening, searching for solace and meaning while stumbling through a haze of anguish. Muffled sobs echoed through the church.

For generations, the parish has been central to the lives of many in Uvalde, a city of 15,000 people an hour west of San Antonio. Now, Sacred Heart has become a nucleus for a community’s grieving.

President Biden, the nation’s second Catholic president, prayed there on Sunday, attending Mass during a trip to Uvalde to console the community. The evening before, hundreds gathered for a vigil. And in the coming days, the parish has a packed schedule of funerals. 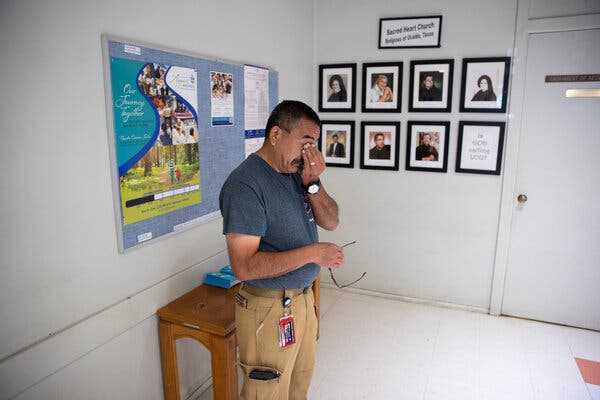 Guillermo Balderas wiping his eyes during a special Mass for the victims on Wednesday at Sacred Heart Catholic Church. Credit…Ivan Pierre Aguirre for The New York Times

Orelia Barker, left, was consoled on Wednesday by Clarice Suchy, a sister at the church. Credit…Ivan Pierre Aguirre for The New York Times

“This is our home,” said Hector Gonzales, the president of Southwest Texas Junior College in Uvalde and a lifelong parishioner. On Tuesday, he had been at the civic center, where some parents were reunited with their children and others learned their sons or daughters had been killed by a gunman who stormed into the school. He heard that a Mass was being quickly arranged, and he hurried over. The church was full.

Since then, the church has kept bustling. Catholic Charities sent counselors who planned to stay indefinitely. Volunteers handed out stuffed animals and tacos. On Saturday, there were raspas, shaved ice available in a multitude of flavors — bug juice, tiger’s blood, grape.

Archbishop García-Siller said that Sacred Heart was meant to be a gathering place not only for practicing Catholics, especially now. He pointed out a passage from the Gospel of Matthew: “For I was hungry and you gave me food, I was thirsty and you gave me drink, I was a stranger and you welcomed me.”

From Opinion: The Texas School Shooting

Commentary from Times Opinion on the massacre at an elementary school in Uvalde, Texas.

The attack at Robb Elementary School has unleashed a cascade of experiences in Uvalde that would have been inconceivable barely a week ago: The shock of the shooting. The heartbreak of immense loss. The fury that crackled after learning that the police delayed going into the classroom where the gunman was locked in with students. The crush of cameras and satellite trucks as the news media from around the world swept in, a line of visiting dignitaries trailing them, including the governor and even Meghan Markle, the wife of Britain’s Prince Harry.

Amid all of that unfamiliarity, Sacred Heart was soothing in its steadiness. It has been a constant for families who have been part of the congregation for decades. Now, as they confront astonishing tragedy, some in the parish feel as if the community has had generations of preparation: organizing fund-raisers, convening prayer groups and delivering meals for families in need.

A municipal court employee lowered the Texas flag to half staff in response to the shooting at Robb Elementary School.Credit…Christopher Lee for The New York Times
Mireyah Chavez, 10, left in middle row, Marisa Salinas and Jose Chavez at Sacred Heart. Mireyah is a student at Robb Elementary School and was present during the shooting. Ms. Salinas, who was a block away from the school during the shooting, said she heard the gunshots. Credit…Christopher Lee for The New York Times

“One thing we know is togetherness,” said Faustino M. Gonzales, another lifelong parishioner (who is unrelated to Hector Gonzales).

Still, some families have drifted, pulled by the ascendance of evangelical congregations, dissatisfaction with leaders as the global Roman Catholic church became engulfed in scandal or a broader societal shift away from institutional religion. Parishioners said attendance at weekend Masses, which had plummeted because of the coronavirus pandemic, had recently inched its way back to where it had been.

Sacred Heart, which was established in 1908, sprawls across a large plot in a neighborhood of modest family homes. There is the gray brick church, which was constructed at least 40 years ago, and the parish school, which has students from kindergarten to sixth grade and has been overseen by the same order of sisters for 110 years. Statues and murals of the Virgin Mary are scattered outside the church.

The congregation reflects a cross section of Uvalde. There are administrators from local colleges, an optometrist, machine shop workers, a bank president, truck drivers, ranchers and service industry workers. The parish is deeply ingrained into their lives and families. It is where babies are christened and grandparents are eulogized. It is where they confess their sins and where students in the parish school learn long division and grammar.

Faustino Gonzales, 76, has lived within a few blocks of the church for most of his life. He attended the parish school, and so did his children. Now, his granddaughter is in the second grade there. “I was married here,” he said. “Wonderful thing. Beautiful.”

His daughter is decades removed from her years as an elementary student, yet he can still remember the letter he wrote to her for one of her class assignments. It was about Sacred Heart. “I’d trade my hunting rifle, my car, even my house,” he recalled writing. “But my childhood and years at Sacred Heart — I’d never, ever.”

The community’s cohesion has, in a way, made the aftermath of the shooting all the more agonizing. Irma and Joe Garcia had been active in the church. Mr. Garcia’s brother is listed in the parish bulletin as a retired deacon. At a vigil, the optometrist noted that six of the victims had been his patients. The Rev. Eduardo Morales, who grew up in the church and has been its pastor for six years, teared up as he described the ties he had to those who were lost.

He acknowledged that he has a lot to shoulder in leading the congregation through this. There are funerals planned for cousins being mourned together, he said, as well as shared services for the Garcias. He also has a schedule of regular Masses and a broader congregation now grappling with an assortment of struggles that have arisen since the shooting. Priests from other parishes have offered to help.

Father Morales was on vacation when the shooting happened, and he had to rush back. He gave his first homily at the Thursday Mass, and since then he has relayed the same messages: Do not let anger corrode into hatred. Hold onto your faith.

Still, the tragedy is also testing some members’ faith.

The grieving for some is beginning to evolve. That early shock has subsided. The gravity of the community’s loss is setting in. That’s why organizers thought it was important to gather again on Saturday, this time for an outdoor vigil with music and a memorial to the victims set up in the parking lot behind the church.

As the sun set to a golden light, children ran around and played, their faces stained purple and blue from their raspas. Families hugged and laughed. Still, their sorrow was never far from the surface. Casual conversations slipped into tears. Parishioners standing at a microphone choked up as they shared details about each of the victims.

Soon, the world’s notice would fade; Uvalde would take its place on a lengthy roster of communities marred by mass violence and identifiable to outsiders by their worst day.

But now, the spotlight was still on Uvalde, and on Sunday, parishioners gathered once again, this time filling the church for noon Mass. The pews were crowded as President Biden took his seat in the first row.

He did not speak during the service. He knelt, made the sign of the cross and prayed along with the rest of the congregation — just another soul searching for unity and clarity who walked through the doors of Sacred Heart.

Light illuminating a statue of the Virgin Mary as people gather for Mass. Credit…Callaghan O’Hare for The New York Times
Tags
Mass Sai̇d That Ti̇mes Who

As Ukraine Fights, Does the E.U. Owe It Membership?

Canada’s Military, Where Sexual Misconduct Went to the Top, Looks for a New Path

Biden Just Proposed a Gas Tax Holiday. Will It Work?

Once Again, Tennis Is Disrupted by Politics
1 hour ago

The Changing Grass at Wimbledon
1 hour ago

Companies Are More Vocal Than Ever on Social Issues. Not on Abortion.
10 hours ago