FLORENCE, Italy — Michelangelo was an old man when he began working on a sculpture he envisioned for an altar for his own tomb: It was of a marble Pietà, depicting Jesus supported by the Virgin Mary, St. Mary Magdalene and the pharisee Nicodemus, whose face is a barely etched self-portrait of the aging artist.

Michelangelo worked on the project between 1547 and 1555, while he was in his 70s, and it was a difficult project from the outset. His friend and biographer Giorgio Vasari wrote the marble block was flawed and full of impurities and that “the chisel often struck sparks from it.” Michelangelo grew frustrated, eventually abandoning the work, and Vasari wrote that Michelangelo tried to destroy it.

But the sculpture survived, and last week the Pietà was publicly celebrated here after its first major restoration in almost 470 years.

Msgr. Timothy Verdon, the director of the Opera del Duomo Museum, which has been home to the statue for the past 40 years, said, “This is Michelangelo’s most personal work, not only because it includes his own self-portrait and was destined for his tomb, but because it expresses the tormented relationship he had with marble.”

An analysis of the marble during the restoration revealed that it did not come from Carrara, Michelangelo’s go-to quarry in Tuscany, as had been supposed, but from quarries in Seravezza, about 10 miles away.

Restorers also saw firsthand why Michelangelo might have left the work unfinished. The marble is imperfect, not one uniform color throughout the block, and contains traces of pyrite, a sulfide mineral that reacts with metal, which would explain why sparks flew when Michelangelo hammered away. The marble block also revealed fractures and minute cracks that would not necessarily have been visible when Michelangelo began to sculpt, but easily shattered when struck. One such fracture may have surprised Michelangelo while he was carving the left arms of Christ and the Virgin Mary; a flaw so unsurmountable that Michelangelo may have been forced to throw in the chisel, as it were.

“He encountered the fracture, he may have tried to work around it, but in this case he wasn’t able to do much,” Paola Rosa, the project’s chief restorer.

After he decided to abandon it, Michelangelo gifted the sculpture to his servant Antonio da Casteldurante, who entrusted it to Tiberio Calcagni, one of Michelangelo’s pupils and sometime collaborator, who reworked the statue into the semifinished state it is now in.

Around 1560, the work was sold to the banker Francesco Bandini, and the work became known as the Bandini Pietà. It made its way from Rome to Florence, where it was installed behind the main altar of the city’s cathedral, underneath large candelabras whose wax drippings left marks.

But it was a plaster cast taken of the statue in 1882 that most significantly altered it. The statue was badly cleaned after the cast was taken, leaving it white and parched. The cathedral custodians of the time decided to apply a lawyer of amber-colored wax, which was reapplied over the decades especially on the most exposed areas. The wax aged, and stucco and other materials — used to join some pieces that had broken off — oxidized, so that the sculpture became blotchy.

“We joked that it looked like a Dalmatian,” said Rosa.

The current restoration began in 2019, and was carried out in an open restoration laboratory at the museum of the Opera del Duomo, the institution that owns and, for 700 years, has overseen the maintenance of Florence’s cathedral and other buildings. There, visitors could watch Rosa and her team work on the sculpture (when the museum wasn’t closed because of the coronavirus).

Removing the layers of wax and grime had returned “Michelangelo’s original idea of the sculpture,” Rosa said in an interview last week, adding that it was “painstaking work.”

Rosa has restored several Michelangelo sculptures in Florence, including the famous David in the Accademia Gallery, as well as the so-called “Pitti Tondo” and a bust of Brutus, both in the city’s Bargello Museum.

“The first time I put my hands on Michelangelo I was 40, now I am 62,” said Rosa, her voice cracking with emotion. “It’s so moving, so particular, and I still don’t feel as though I know him,” she said. “With just a few blows with his scalpel, he’s able to do amazing things,” she said.

The Opera del Duomo Museum houses one of the best collections of late medieval and Renaissance sculpture in Italy, and some 600 statues were restored when the museum was closed and revamped, reopening in 2015.

“We’d basically engaged every reputable restorer in central Italy for a period of two years to do this blitzkrieg on the dirt on our statues,” said Verdon.

The Pietà was the only major work not to be restored at the time, because it required “expertise and time,” and would give the museum a fresh occasion to showcase its collection later, said Verdon, the museum’s director, at a media conference on Friday.

Antonio Natali, a board member of the Opera del Duomo, said in an interview that while another Michelangelo Pietà was more famous — the one created for St. Peter’s Basilica in Rome when the artist was 24 years old — the newly restored work was “the most touching of them all.”

This Pietà was also one of Michelangelo’s most tormented works. Sculpting it, he meditated on his own death, even as he fretted that the marble — a material he had mastered — would not comply with his chisel.

In his biography of Michelangelo, Vasari wrote that he visited the artist late one night and found him working on the sculpture, “trying to make changes” on one of the legs of the figure of Christ. When he saw Vasari watching, “Michelangelo let the lantern drop from his hand, leaving them in the dark,” to prevent Vasari from seeing it.

Michelangelo then told Vasari: “I am so old that death often tugs me by the cape to go along with him, and one day, just like this lantern, my body will fall, and the light of life will be extinguished.”

What We Learned From Week 3 of the N.F.L. Season 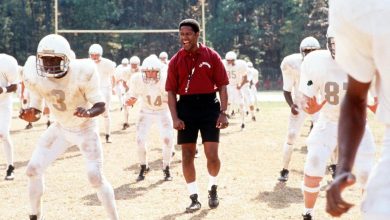