It wasn’t the sounds of the bombs, though he did hear those, that brought back the memories for Darijo Srna. It was the air raid sirens.

When they blared in Kyiv shortly after 6 a.m. on Feb. 24, Srna froze in terror. His mind flooded with thoughts and recollections of his childhood, of his first experience with war, when the former Yugoslavia broke apart in the 1990s.

Since then, soccer has taken Srna, 39, far from his home in Croatia to a distinguished career, the bulk of it with the Ukrainian club Shakhtar Donetsk, where he is currently the director of football, and to games in the Champions League and at two World Cups. But in an instant, the sounds of sirens brought it all back.

“I started to panic,” he said. “You have some trauma for all your life, for sure — deep in yourself. That is something you try to forget. But you can never forget these types of things.”

Shakhtar Donetsk had run from bombs before. In 2014, the last time Russian forces invaded Ukraine, missiles landed on Shakhtar’s stadium. Within days, the club packed and headed west, beginning a nomadic existence: to a new home in Lviv, in the far west of the country, and then east again, to Kharkiv, before settling in the capital, Kyiv. 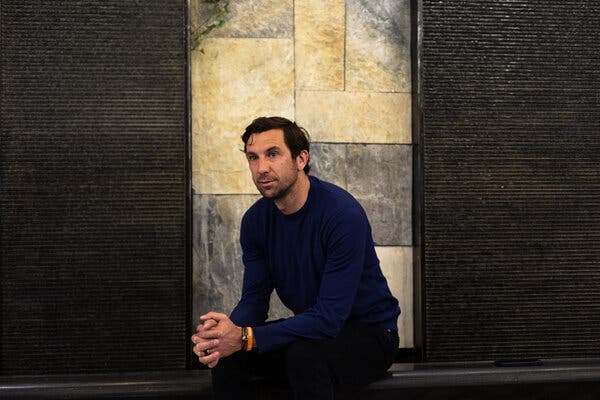 Darijo Srna, who spent 15 years at Shakhtar as a player, is now a top official at the club.Credit…Bradley Secker for The New York Times

Now Shakhtar is on the move again. Last week, after receiving special permission to take military-age men out of the country, its players and coaches landed in Istanbul. With war leading to the suspension of the second half of the Ukrainian season, Shakhtar will soon become a touring team, playing exhibition games — the first was Saturday in Greece — to bring attention to the plight of Ukrainians and to raise money for the war effort.

Shakhtar Donetsk had never stopped being a team. Now, it hopes, it will be a symbol, too.

“I don’t know which kind of team in the history of football can be compared to us,” Srna said. “No other team has ever felt or lived what we have in these past eight years.”

A Team in Exile

Shakhtar officials had been convinced there would not be a war, even as Russia massed forces and equipment on Ukraine’s border; even as the players began to fret; even as worried family members called them daily at a winter training camp in Turkey with news, warnings, pleas.

So in February, Sergei Palkin, Shakhtar’s chief executive, called a meeting in an effort to assuage the growing concerns.

“I said that everything would be OK because the president of Ukraine, everybody, was saying that no problems, war will not come,” Palkin said.

The team flew back to Kyiv. But Palkin was wrong. Three days later, Russian troops streamed across the border, and rather than prepare to play the second half of its league season, the team’s management suddenly found itself needing to make altogether different calculations.

While many of Shakhtar’s Ukrainian players relocated to Lviv, which hosted the team when it was first forced to leave Donetsk, a group of more than 50 players and staff members took refuge in a hotel owned by the team owner Rinat Akhmetov. From there, timely help and frantic phone calls helped forge a plan to get the club’s foreign players and their families to safety.

Srna was a key conduit in those discussions, which also involved players’ unions, Ukrainian and neighboring soccer federations and the sport’s governing body in Europe, UEFA. He said his own experiences — he was also a member of the team the last time it fled to safety, in 2014 — served as a guide.

“Unfortunately,” he said ruefully, “this is my third war.”

Only after the players were on their way home to South America and elsewhere did Srna embark on a journey of his own: what turned out to be a 37-hour drive to Croatia, where much of his family still lives, to reassure them he was safe. Two family members on his father’s side were killed after the breakup of the former Yugoslavia, so his weren’t the only nerves that needed calming.

Sergei Palkin had tried to reassure his team that there would be no war. He was wrong.Credit…Bradley Secker for The New York Times

After touching base, though, Srna quickly set about tackling a new task: how to move the dozens of children based in Shakhtar’s youth academy outside Kyiv out of harm’s way. The effort was professional but also intensely personal: Many of the children were only 12 and 13, about the age Srna had been when he first experienced war.

Hajduk Split, Srna’s first professional club, said it would be willing to accommodate the boys if they could get to the city. Dinamo Zagreb, another Croatian team, said it would provide buses if Shakhtar could get the players to Ukraine’s border with Hungary. The players and the rest of Shakhtar’s traveling party spent two days at Dinamo’s stadium, Srna said, where they were fed and evaluated by doctors before moving on to Split.

Today, because of the effort, more than 80 children, some of their mothers and a few aging coaches and medical staff members are safely in Croatia, far from the worst horrors of war, training and even playing games again.

“I just put myself in their situation,” Srna said of his involvement. “I didn’t want these children to stay and listen all day to bombing and bullets.

Like every other corner of the Ukrainian population, Shakhtar has been touched by the war in more serious ways, too. A coach from the team’s academy died after his hometown was overrun by Russian forces in the first weeks of the war. Two staff members from the team’s merchandising department have taken up arms.

Shakhtar’s training site in Kyiv also bears the scars of conflict. Chunks of its training fields have been gouged by shelling, and artillery fire ripped open sheds where the team stored training equipment.

The conflict has also brought renewed attention to figures like Akhmetov, Ukraine’s wealthiest man. Like a handful of oligarchs in Russia, he grew immensely rich — sometimes amid questions of dubious means — in the wild and unpredictable aftermath of the breakup of the Soviet Union. Akhmetov has made a point to be seen as contributing millions of dollars of his fortune to the war effort, and he said in an interview that he remained committed to his country and team. “All our efforts are focused on the only thing that matters — to help Ukraine win this war,” he said.

The efforts of Akhmetov and his soccer team are now entwined with those of the Ukrainian government — relationships that have already helped Shakhtar overcome some unique hurdles. Before it could depart for Turkey, for example, the club needed special government exemptions from an emergency law barring military-age men from leaving the country during the war. Those approvals finally arrived on Wednesday afternoon. Now that it is based in Istanbul, its tour will serve several functions.

The games, starting with one against Olympiakos in Athens on Saturday, are viewed in part as a diplomatic tool, a chance to personalize Ukraine’s humanitarian crisis, raise money for the country’s military and provide humanitarian aid for its citizens.

But the matches will also play an important sporting role. Several Shakhtar Donetsk players are also members of Ukraine’s national team, and the games will help to ensure their fitness ahead of a key qualification playoff in June for the 2022 World Cup. (Shakhtar’s rival, Dynamo Kyiv, is playing a series of exhibition games for the same reasons; both clubs have said they will call up players from other Ukrainian teams to supplement their rosters, in part so Ukraine has the best chance of advancing to the World Cup in the June playoff.)

Shakhtar’s games have multiple aims: to raise awareness about the country’s plight and to keep its national team sharp ahead of a World Cup qualifying playoff in June. Credit…Yorgos Karahalis/Associated Press

The Shakhtar team that will take part in the coming tour — matches against Polish and Turkish clubs have been arranged, and games against A-list opponents could follow — has been shorn of much of its international talent: Most of those players exercised an option allowing them to temporarily sign with teams outside Ukraine after the outbreak of war. Most will never return. But some, like the Brazilian defender Marlon, have said they will be back, and others are mulling their options.

“We are not angry, we are all human beings,” Srna said. “It’s important they are safe and with their family.”

The new season in Ukraine is, for now, scheduled to begin in July. With so much damage to the country and war still raging, the timetable appears to be little more than a place holder. When soccer returns, as it eventually will, nothing will be the same.

It is not even clear if Donetsk, Shakhtar’s home, will remain a part of Ukraine, a prospect that could make the team’s temporary exile a permanent one. Whatever the case, whatever the conclusion, team officials said Shakhtar would never turn its back on its roots.

“They can put any flag they like in Donetsk,” Srna said. “But Shakhtar will always be from Donetsk; it’s something no one and nothing can ever change.”

Wherever Shakhtar ends up calling home, whoever it plays in the interim, one idea remains impossible to even contemplate: games against Russian opponents. Palkin said he was confident European soccer officials would ensure that Ukrainian teams would not cross paths with opponents from Russia in future competitions. But he had a simple answer if Shakhtar was ever faced with such a matchup. “We wouldn’t play,” he said.

‘Cheap as Chips’ No Longer True in U.K. as Prices Soar for a Favorite Meal

Tiger Woods: My Leg Feels OK, as Long as I Don’t Play Golf
12 hours ago

With a ‘Special Group,’ the Mets Find Ways to Win
12 hours ago

‘Racism’ Has Too Many Definitions. We Need Another Term.
12 hours ago