LA PAZ, Colombia — On a coca farm hidden in the jungle, a half-dozen day laborers slip out of hammocks and head to work, harvesting the shiny green leaves that will become cocaine.

In the nearby village of La Paz, chalky white cocaine base serves as currency, used to buy bread or beans. And in the community pavilion, propaganda on the wall pays homage to an insurgency that, in villages like this one, never ended.

Scenes like these were supposed to be a thing of the past in Colombia.

Five years ago, the government signed a peace deal with the largest group of rebels waging war, the Revolutionary Armed Forces of Colombia, or FARC, signaling the end of a conflict that had raged for half a century and left more than 220,000 people dead.

The rebels agreed to put down their arms, while the government promised to fold long-neglected rural communities into the Colombian state, offering jobs, roads, schools and a chance at a better life. By addressing poverty and inequality, the peace pact was supposed to extinguish the dissatisfaction that had fueled the war.

Workers weighing coca leaves last month in La Paz.
A deforested jungle on the outskirts of the village.

But a third of the way into the deal’s 15-year time frame, much of that help has still not reached the Colombian countryside. Armed groups still control villages like La Paz.

And, experts warn, Colombia’s window to achieve the lasting peace envisioned in the accord may be closing.

Colombia’s 2016 peace pact was among the most comprehensive in modern history, earning global applause and a Nobel Peace Prize for then-president Juan Manuel Santos. The United States, which had spent billions of dollars supporting the Colombian government during the conflict, was among its biggest supporters.

Since then, more than 13,000 FARC fighters have laid down their arms. Many are integrating into society. The deal also established an ambitious transitional justice court that is investigating war crimes and indicting major players.

After five years, many scholars consider a peace agreement a success if the signatories have not returned to battle. By those terms, the treaty is a success: While dissident factions remain, such as in La Paz, FARC as an institution has not rearmed.

But many scholars and security experts warn that the transformation of the long-neglected countryside — the heart of the deal — is perilously stalled. By failing to gain the trust of rural people, experts say, the government is allowing violent groups, old and new, to move in and perpetuate new cycles of violence.

Laborers carrying heavy bags of coca leaf last month in La Paz.
The hands of a coca leaf picker, with fabric wrapped around his fingers to protect them from the wounds of the harvest.

“There are too many things that have not been done,” said Sergio Jaramillo, a top negotiator for the government in 2016.

President Iván Duque, a conservative who since his election in 2018 has been in the uncomfortable position of implementing a deal opposed by his party, called the criticism unfounded.

“There is not a slow implementation whatsoever,” he said in an interview. “We have been not only implementing, but the issues that we have been implementing are going to be decisive for the evolution of the accords.”

To secure poor farmers’ rights to land, his office has granted thousands of them land titles, he said, and approved more than a dozen regional development plans.

But Mr. Duque’s party is allied with powerful landholders who have the most to lose if land ownership rules are rewritten, and many critics accuse him of slow-walking the effort.

According to the Kroc Institute for International Peace Studies, which monitors the deal’s progress, just four percent of the accord’s rural reform measures are complete. As of June, another 83 percent either had just started, or had not been started at all.

A gram of coca paste is used as currency equal to 75 U.S. cents. This fish cost almost 5 grams.

At the same time, security has worsened in many rural areas, as criminal groups battle for territory previously held by the demobilized FARC.

Mass killings, mass displacements and the murders of social leaders are all up since 2016, according to the United Nations, making it increasingly difficult for the state to move in.

Analysts fault both Mr. Duque and his predecessor, Mr. Santos, for failing to fill the vacuum left by the FARC.

The village of La Paz sits more than three hours from the nearest city, down a long, muddy road. A statue of the Virgin Mary presides over the town’s two main streets. There is no cell service here, and community meetings are announced over a loudspeaker hitched to a post at the center of town.

During the war, La Paz was FARC territory. Coca was the main driver of the economy. Poor farmers picked it, rebel fighters taxed it and narcotraffickers turned it into cocaine, then ferried it to buyers in the United States and beyond.

When the deal was signed, it was met in La Paz, a town whose name means “peace,” with much skepticism — and some hope. The government included the area in one of its development plans, while coca farmers were invited to participate in a substitution program meant to help them grow new crops.

A sick woman in a house in La Paz. Finding a malaria test can take days and a lot of money in such a remote place.
Macaws in the trees above the trails in La Paz.

But the changes that followed were limited. A portion of the highway to La Paz has been paved. Electricity and ambulances have reached some of the remote towns.

But a dissident faction of FARC remains in the jungle nearby, taking in new recruits. Their “laws” — laid out in a manual — dictate everything from punishments for thieves (death after a third infraction) to labor rules (forbidding wage discrimination) to taxes (those with means must pay).

The bad roads prevent them from getting other crops to market, residents said, and a lack of cash shuts them out of the mainstream economy. The town’s store accepts cocaine base as payment, instead of coins and bills.

“We know that what we are doing is illegal, and that we are hurting Colombia and the world,” said Orlando Castilla, 65, a community leader, speaking of the coca crops.

“But how else are we going to make a living?”

At her home down a long dirt path, Sandra Cortés, 44, a mother of 11 — her “half battalion,” she called them — explained that she was among those to join the coca crop substitution program.

The decision to participate was a leap of faith: It required her family to rip out their entire crop, which represented almost everything they owned. In return, she received a year of subsidies equal to the minimum wage, a cluster of fruit tree saplings, some farm equipment and a few visits from a technician who was supposed to teach her a new skill: how to raise cattle.

Sandra Cortés holding her baby next to her daughters Angie, Yeimi and Karen at their house earlier this month in La Paz.
Orlando Castilla in front of the communal house of Salto Gloria Medio last month by the Inirida River in La Paz.

But soon the subsidies ended, most of the trees died, and the technician disappeared. She never received the funds or the know-how for the cattle.

Desperate, she sold her land to a neighbor, she said, and now she borrows money to feed her children.

“We really thought that they were going to help us,” she said, cradling her 14-month-old. “We were wrong.”

Of the 99,000 families who participated in the substitution program, just over 7,000 have productive new businesses today, according to the government.

On another morning, on a coca farm outside of La Paz, farmers taking a lunch break said they had noticed one shift since the peace deal. The government had dramatically increased its efforts to eradicate the crop — and with it, their livelihoods.

“Today, the war is the government against the peasant,” said José Yarra, 44, a coca farmer.

“If I have no other way to make a living,” said another farmer, Mr. Jiménez, “I will have to go to the guerrilla.”

Colombia will hold an election next year, and by law a president cannot run for re-election. So it will fall to Mr. Duque’s successor to try to build peace on the back of the current distrust and insecurity.

Despite these concerns, several experts said they still saw reason for cautious optimism.

“Implementation is going to be consistently more and more difficult,” said Kyle Johnson, the co-founder of Conflict Responses, a nonprofit in Colombia focused on peace and security issues, “but not impossible.”

Many hours from La Paz, a village called Las Colinas offers a glimpse of what the future could look like.

Built following the peace accord, Las Colinas is home to hundreds of former FARC fighters now leading civilian lives. Thanks to government and international funding, they have 270 homes, a school, a meeting house, a health clinic, a library and a computer lab.

They have also formed several cooperatives, and on a recent day construction was underway for a supermarket, a produce collection center, a processed food plant and a restaurant.

Success is far from certain. It’s unclear if any of these businesses will be profitable, or how long government and donor funds will last.

And the village president, Feliciano Flórez — still best known by his nom de guerre, Leider Méndez — said that they live in fear. Since the deal was signed, at least 286 former combatants have been killed, according to the United Nations — many by armed groups, some for supporting the peace deal.

But Mr. Flórez, 27, sitting on his porch with his toddler on his lap, encouraged Colombians not to lose faith in the peace promised by the accord.

“We’re committed,” he said. “But I believe it’s a job we all have to do together.” 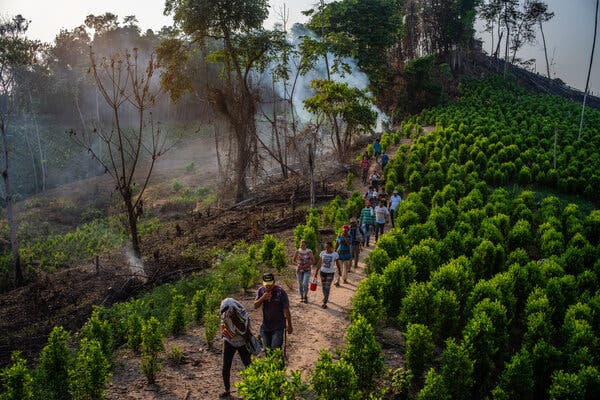 Farmers walking near to a coca crop in 2020 in Cúcuta.

Reporting was contributed by Sofía Villamil in La Paz and Carlos Tejada in Seoul.

Known for Feuding With Immigrants, a TV Star Wants to Run a Town Many Call Home